You are at:Home»Current in Geist»Geist Cover Stories»Sea of flags: Field of Honor display elicits emotional memories for those involved

For the fourth consecutive year, Jeff Young placed 500 American flags in near perfect rows in Lawrence for the Field of Honor display, set up as an unofficial gateway to the city’s Fourth Fest. Each flag represented someone who served the community through the military, police and fire departments and — new this year — essential workers on the front lines of the COVID-19 pandemic.

The display was sponsored by the Exchange Clubs of Lawrence and Hancock County, which are part of Region 7 of the National Exchange Club. Region 7 also includes Johnson County.

Each flag has a story, and one in particular floods Young  — a member and past Region 7 president — with vivid memories, even though the events happened long ago. 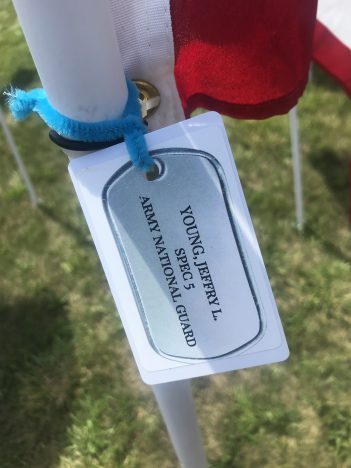 In 1969, Young’s father received a phone call from Young’s brother, Rick, to announce that he was home from the Vietnam War.

“My dad gets a call. ‘This is Ricky, I’m home, but don’t tell Jeffy. I want to surprise him. Dad, I’m hurt, I took shrapnel last week. I’m getting my second Purple Heart. I want to be home very soon. Come and get me in Chicago,’” said Young said, whose brother had just spent 13 months in Vietnam.

“As he came through the turnstile at Chicago O’Hare airport, he was spat upon by those who didn’t agree with the war,” Young said. “That’s why I’m passionate. That’s why there’s a flag out there for Sgt. Rick Young, Vietnam, who we lost to Agent Orange 10 years ago.”

Upon returning home from Vietnam, Rick Young snuck into Jeff’s room while he was asleep, grabbed the right side of the bed sheets, pulled and rolled his then-19-year-old brother right out of bed, a move that the elder Young had done countless times as the two grew up.

“I bawled,” Young said of the memory. “And you know what he did, he said, ‘You’re 19 now, let’s go have a beer.’ He goes out into the kitchen and he brings me a beer. It’s like six in the morning, but I had a beer with my brother when he got back from Vietnam.”

The memories were poignant for Lawrence Deputy Chief of Police Gary Woodruff, too.

“If you don’t get a lump in your throat when you look at all these American flags and all these military flags representing the various military branches, there’s probably something wrong,” Woodruff said. “It’s heart rendering.”

The land used for the Field of Honor is next to the Indiana Military Hall of Fame on Herbert Lloyd Road, which has special meaning for Woodruff. The area was once part of Fort Benjamin Harrison, a base on which Woodruff served during his time with the military police in 1985 and 1986.

“It makes it all the more special that we are able to host it right here in Lawrence on property that used to be in the fort,” Woodruff said.

On July 5, the flags in the Field of Honor were removed. They will be carefully stored in a shed under Young’s care until their next appearance. Some are expected to be used in a Sept. 11 tribute in Hancock county. But all will be back in Lawrence in a year’s time, so the memories can flood back again. 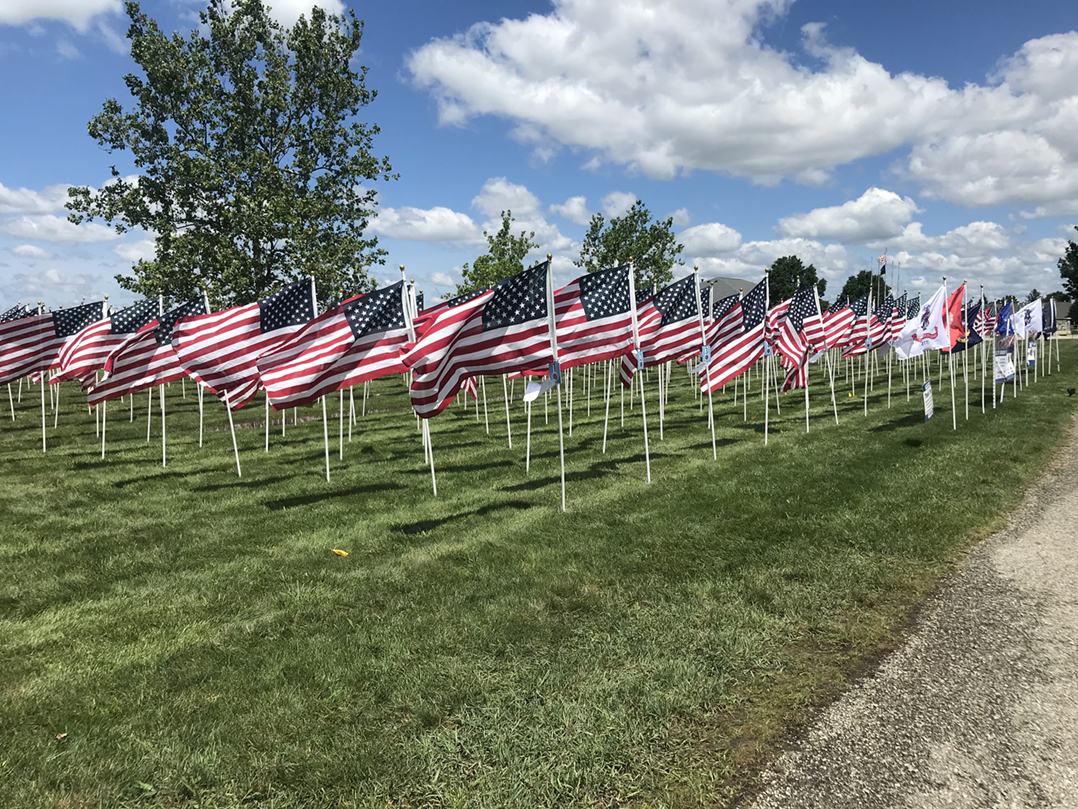 There were 500 flags in the display. The majority had either a dog tag or identification card for someone who served the nation or community in a selfless way.

The Exchange Clubs of Hancock County and Lawrence

The club’s main service project is to promote the prevention of child abuse, but it branches out into other areas as well. The club partners with Veterans Matter to help house more than 400 Hoosier veterans who had previously been homeless.