You are at:Home»Current in Fishers»Fishers Cover Stories»Riding on: Fishers man is riding his bike 25k miles to raise money for overseas children’s home

Dan Farrell, 73, is a safety manager at Frontier Communications. For work, he covers a seven-state territory in the Midwest. But in his hobby, bicycling, he’s aiming to go around the world.

As of June 29, Farrell has a little more than 4,000 miles remaining in his quest to bike 25,000 miles, the approximate circumference of earth. He tallies miles on the bike from his daily ride from his home in Fishers to his office in Noblesville and from rides for fun across rural country roads in northern Hamilton County. He rides to Frankfort, Kokomo and Anderson, down into Indianapolis and home. He rides whether it is sunny, raining, or snowing. It adds up to about 250 miles a week, or 1,000 miles a month.

“I do it in a fairly round-about way,” Farrell said.

“It’s pretty epic, to be honest with you,” said Gerald Stanley, who played football at Hamilton Southeastern High School with Farrell’s son, Brent, and helps Farrell track and promote his ride. “With Dan being (73) years old and riding 50 or 70 miles a day, it’s very much a story about discipline and commitment.”

Farrell has long enjoyed riding his bicycle, but in 2019 he was seeking to ride for a purpose. He approached Stanley, who had an idea. Stanley, 43, suggested Farrell ride his Salsa Vaya — a stainless steel, light touring bike — the 8,428 miles between Fishers and Andrha Pradesh, India, the site of the Faith in Deeds Children’s Home.

“What really brings all the more urgency to this is, we are looking at 55 orphans there at the Faith and Deeds orphanage, but due to the COVID (pandemic) and black lung disease that’s devastating other parts of the world, the Indian government is very strongly urging the orphanage to take on 200 additional orphans,” Farrell said.

The goal was to raise $50,000 for the orphanage, which could be used for an 18-month project to expand the facility to meet the heightened demands. Farrell began his trek in late 2020, finishing in September, but while the ride was complete the goal was not met.

Bicycling has long been a family bonding experience for the Farrells.

Farrell’s father, Ralph, was a bicyclist. The father and son rode The TOSRV –Tour of the Scioto River Valley, a major bike ride in from Columbus to Portsmouth, Ohio and back — together, as well as other routes across the Buckeye State. Even after Farrell moved to Indiana in 1983, they would meet in western Ohio or eastern Indiana for rides.

“I would have different books that had different routes that you could take out in the country, and we would take different ones,” Farrell said. “We were able to spend lots of good times together just putting in some miles.”

Whether with family or without, Farrell has ridden all across the nation, into Canada and in a couple of European nations. Of all the miles he’s traveled, one of his favorite stretches was a journey he took with his youngest son, Brad, from Anacortes, Ore., to Fargo, N.D.

Along the way, they rode through the Rocky Mountains, Glacier National Park and the Cascades. It would be one of the last biking journies he had with his father, who died in 2013 at age 89.

“(My son and I) were a little hesitant to have my dad come along and SAG for us,” Farrell said. “But we just had a great time together. (After the trip) I talked to my dad every night, and he just said time and time again how much he enjoyed that trip.” 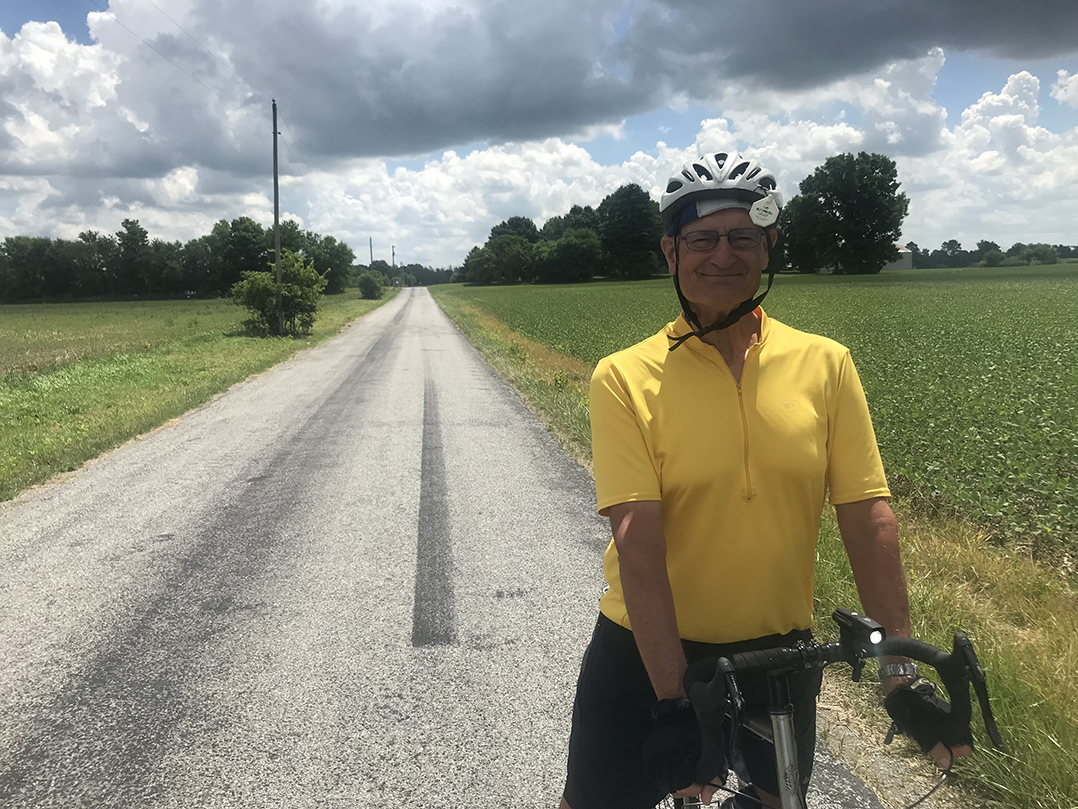 Farrell on one of the country roads he navigates in his attempt to hit his goal of 25,000 miles. He rides between 50 and 70 miles each day, five days a week. (Photo by Jonathan Matthes)

Riding 50 to 70 miles a day provides Farrell a significant amount of time for quiet reflection, which he uses for prayer. He is on a prayer team at Grace Church.

“I get a list of people or situations to pray for, and I include that within my biking effort,” Farrell said. “It’s a spiritual exercise, but it’s not like an exercise like it’s a drudgery or whatnot. It’s something that I very much look forward to, and it’s conversing with God and being able to really have a higher quality of life by having things in perspective.”

Incorporating his faith in his biking hobby became a driving force in his pursuit of raising the money for the orphanage.

“It gives me a sense of purpose, a sense of structure, a goal,” Farrell said. “I feel very, very blessed to have my health, to continue working and to be able to use that to further this cause.”

To learn more or to donate to Farrell’s fundraising campaign, visit oneorange.org/ride-the-world.

The Faith in Deeds Children’s Home

Farrell has not been to the Faith in Deeds Children’s Home in Andrha Pradesh, India, but Gerald Stanley has.

“My first trip was in 2014 and I’ve been back four times since,” Stanley said.

Stanley has adopted two daughters from Central America, and during the adoption process, he was drawn to ministry. He joined Hands of Hope, a charity based out of the Fishers and Noblesville area. Hands of Hope partners with children’s homes around the world, one of which was Faith in Deeds. Hands of Hope liked their leadership and structure for handling donations.

The orphanage was established by Thomas and Dana Mollhagen, a couple from Michigan, although Thomas was born in India and adopted in the U.S.

“He felt like God was calling him into ministry and to take care of the kids in India,” Stanley said. “So, he started the children’s home.”