Azionaqua Swim Club, a recreational swimming facility in Zionsville, will celebrate its 61st anniversary in August with a fundraising event for upgrades and a proposed community center for year-round activities, said Eileen Davis, the club’s board president.

Talks of creating a recreational swimming facility in Zionsville began in 1956, according to Azionaqua officials. On Aug. 6, 1960, the Olympic-sized pool at the facility opened on 4875 Willow Rd. Its grand opening was held Aug. 21, 1960.

“We tried to celebrate our 60th anniversary last year, but because of COVID, we had to postpone it to this year,” Davis said. “Now, we’re calling it the 60th + 1 anniversary celebration.”

Azionaqua will celebrate its 60th + 1 anniversary with a fundraising event scheduled for 6 to 11 p.m. Aug. 21 at the Golf Club of Indiana, 6905 S. 525 E., Whitestown. Tickets are $75 and include two drink vouchers. VIP tickets are $125 and include a guest pass, unlimited drinks and a raffle ticket for a silent auction. The event also includes a dinner. Additional details will be posted to azionaqua.com, Davis said.

“The event is important, first of all, to draw attention to the fact that we’ve been a staple in the Zionsville community for 60-plus years,” said Ginger DeCoursey, the facility’s aquatics director. “And when this pool was built, this was the country. People went out to the country to go to the pool. This is our land, but it was farmland at the time. Now, it sits in what most people would consider the middle of town. Being able to celebrate a piece of history is important, but I also think it’s important to stay relevant. We need to have some updates, and our regular operating budget cannot maintain the updates that we think we need to improve upon.”

DeCoursey said the facility, which is open between Memorial Day and Labor Day, has anywhere from 400 to 700 visitors a day, not including swim teams that use the 50-meter pool or people who enroll in swim classes.

“We can’t wait, because we have improvements that need to be made,” Davis said. “So, we are going to go ahead with our fundraising campaign, and I thought it would be fun to do a little history. A lot of people in Zionsville grew up here going to the pool. We are going to have a reunion for those people.”

Davis said Azionaqua, in addition to its Aug. 21 event, plans to host a reunion later this year, although a date hasn’t been determined.

Proceeds from the 60th + 1 event will pay for pool repairs and help fund a future expansion, which could include a community center, Davis said.

Azionaqua, a nonprofit, operates primarily on proceeds generated from membership fees and guest passes, but additional funds would help the facility expand and make use of the 12-acre property. Davis said Azionaqua officials envision the future community center holding year-around swimming/fitness-related classes, including martial arts, Pilates and yoga, to stabilize revenues for the operating budget and provide a large, functional indoor space for Zionsville residents. They also hope to build an indoor pool in the community center. 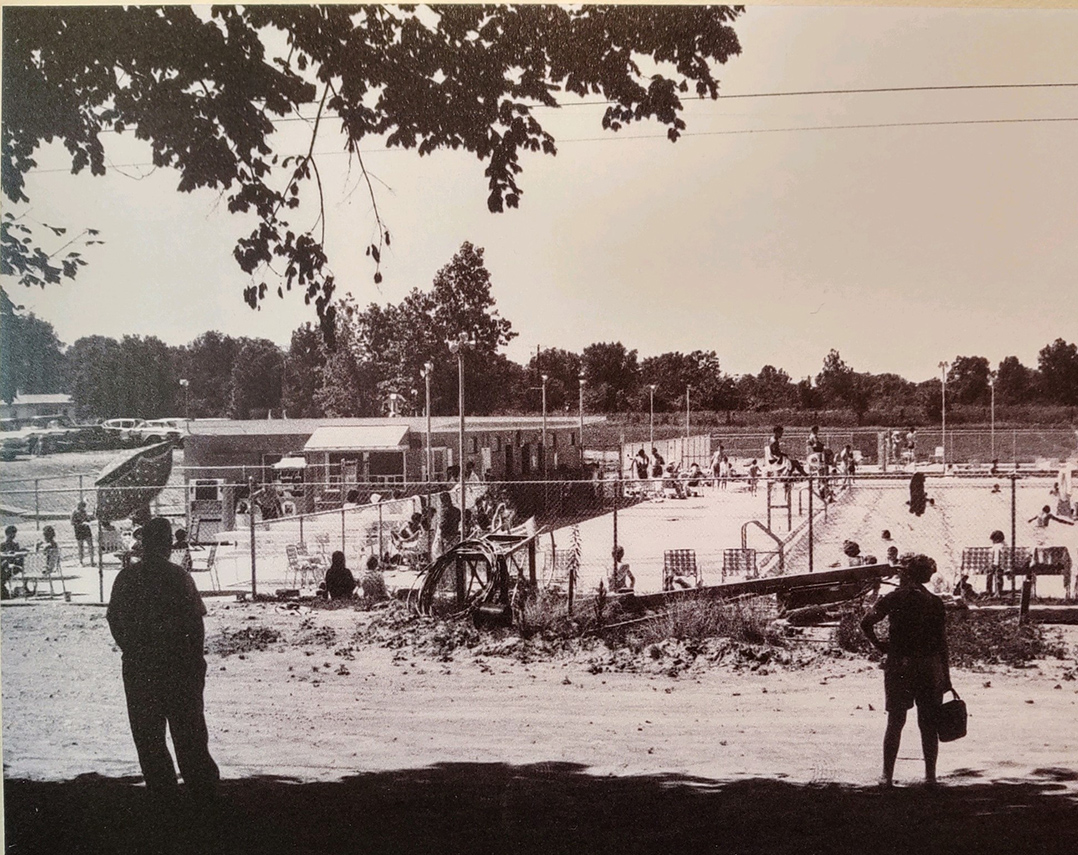 Azionaqua will celebrate its 61st anniversary Aug. 21. (Photo by Lloyd Riley with the SullivanMunce Cultural Center)

Azionaqua board president Eileen Davis said the facility is actively considering the creation of a community center — one that would allow it to offer classes and activities throughout the year. She said the Town of Zionsville recently approached Azionaqua officials with an idea to partner on the project.

“We have been talking to the Town of Zionsville about maybe joining forces with them on a community center,” Davis said. “We are just in the very beginning stages of talking to them.”

The Town of Zionsville and Azionaqua Swim Club have entered into an agreement in which the town and Azionaqua are actively exploring additional recreational opportunities for town residents, according to a November 2020 media release.

The agreement is the first stage in assessing recreational opportunities. As part of the planning process, the town would hold public-input sessions, including stakeholder meetings and focus groups.

Amanda Vela, the town’s public information officer, said there have been no updates on Zionsville’s plans for the community center since November 2020.

Davis said that if the town is unable to assist Azionaqua in the creation of a community center, the facility would pursue one at a later date.

“That is our eventual dream,” Davis said. “If the town doesn’t come on board, we still need to do something. We still need to build a safety net for emergency repairs as well as fix up the pool house, because we can’t compete with other pools if we have a run-down facility.”

Davis said the facility’s long-term vision, which includes an indoor pool, classrooms, an observation deck, additional parking and other amenities, might cost up to $30 million and require multiple phases to complete. She said a third party or sponsor might also be required to pay for the additions.

But not all Azionaqua members support the creation of a community center. Zionsville resident and Azionaqua member Hillary Bustamante said she wants to keep the small-town atmosphere of the pool.

Bustamante, who lives within a half-mile of the pool, said she’d rather a community center be built at another location in Zionsville.