Nathan’s Famous International Hot Dog Eating Contest reigning champion Joey Chestnut says there’s no big reason why he moved to Westfield, rather he had a bunch of little reasons.

Overall, the professional eater said he’s happy to have moved to the city.

“I’ve been coming to the Indy area for years and I knew I wanted to come to this area, and I really liked the community right from the start,” said Chestnut, who moved to Westfield from California at the end of April. “Every time I come here,I love it.”

Chestnut recently competed in the annual Nathan’s Famous International Hot Dog Eating Contest, but because of the timing of press time, Current could not publish his results as he had not yet competed. The men’s and women’s champions receive $10,000 each.

Chestnut, who earns a living as a professional eater, competes in more than just hot dog contests, though. In a typical year, he competes in as many as 23 eating competitions. This year, because of the COVID-19 pandemic, he plans to only compete in 12.

Chestnut frequently trains for his competitions, a process that involves lots of what he calls “cycling.” He’ll conduct a practice contest, and following the practice day he eats high amounts of fiber. When asked how much fiber, he said “pounds of salad and lettuce.” Then, he follows the high-fiber day with a fasting period of roughly 36 hours. Then, he completes the cycle again.

“I’ll videotape my practices and watch it and try to figure out why I’m slowing down where and how to do it differently,” he said. “Every practice I try to go up a little bit more. Right now, I’m at a pretty good place. I’m breaking records in practice and I feel like my body is enjoying it, too.”

Chestnut said he’s always been a fan of eating one meal a day, but he said he did get “carried away” during the quarantine period in March 2020.

“I’m a little heavier this year,” he said.

Outside of his practice competitions, Chestnut doesn’t train much.

“I used to run more (than I do now),” he said. “I still try to a little bit. I have a home gym. The eating is way better practice, but I can eat better when I’m running more and I’m more fit and I can control my breathing.”

Chestnut said after a typical contest, his weight can fluctuate up to 25 pounds.

“Fifteen pounds of that is hot dogs and buns and drinking a gallon of water to get them down, because if you don’t drink water when you’re eating them, they won’t digest well,” he said.

In addition to the Nathan’s Famous International Hot Dog Eating Contest July 4 in Coney Island, Chestnut has an ice cream contest in August.

“It’s so painful in so many ways,” he said of competitively eating ice cream. “My mouth is hurting, my throat is hurting. The brain freeze doesn’t happen much, but my hands are hurting because they’re touching the ice cream (while eating). My stomach is a radiator, so I end up shivering.”

Chestnut said the hardest competitions involve foods he doesn’t like, or foods he does like that are prepared poorly. His favorite contests involve ribs or chicken wings if prepared right.

“I have a good technique to get the meat off the bone,” he said. 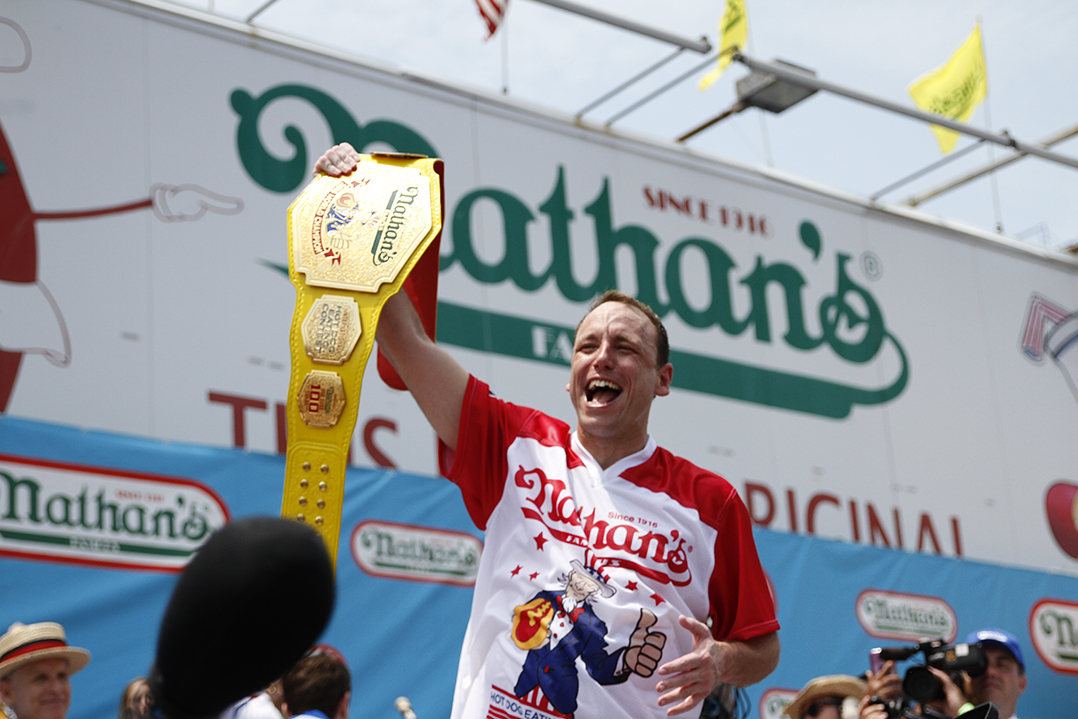 Chestnut never planned to be a competitive eater. He received his civil engineering degree and, while at college, he said he ate healthy during the week and then would eat unhealthy during the weekend as a reward.
“I would eat all my mom’s leftovers and then I would take my brother out to eat,” he said. “I love to eat. And my brother said ‘Joey, you can eat more than anybody, you should do that (hot dog) contest on the Fourth of July.’ I had just watched the Fourth of July contest and thought, ‘I could beat them,’ but I was kind of ashamed of my ability to eat. It’s something I was always holding back.”

“As soon as I got on stage, it’s like completely against everything – you’re eating in front of people and not holding back and people are encouraging you to keep going, and I fell in love with it and it snowballed,” Chestnut said. “I thought, ‘I have to win the Fourth of July contest.’”

Even after more than a decade of eating competitively, he said he still enjoys a good hot dog. 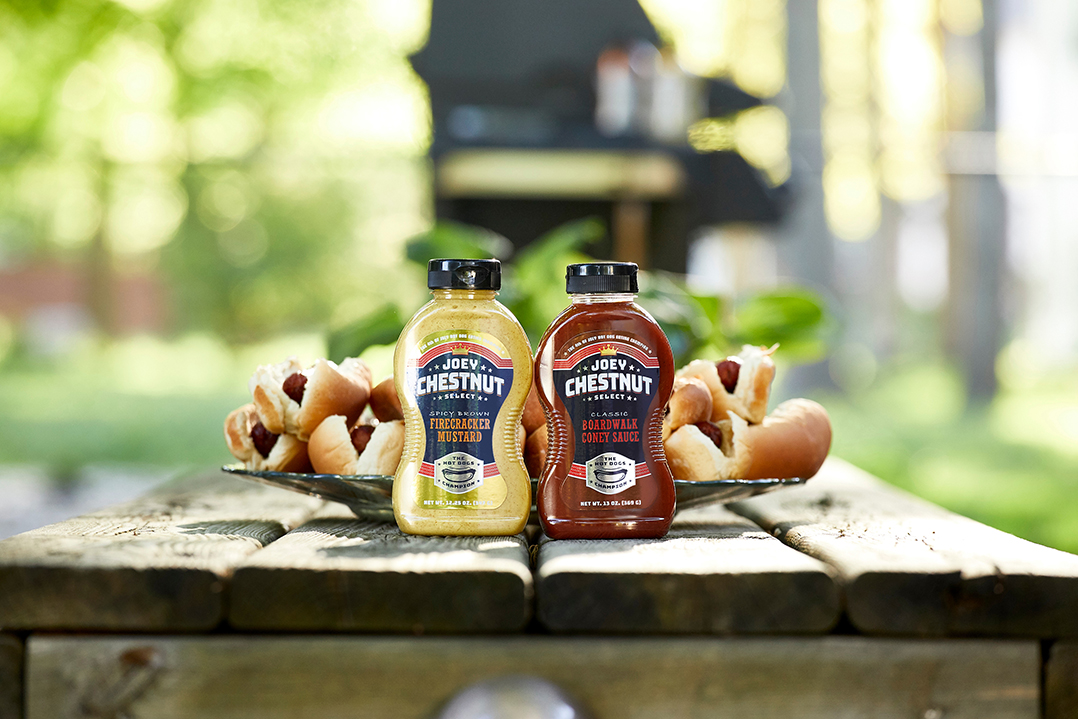 Joey Chestnut Eats has six sauces for purchase in 1,500 stores in the Midwest. (Submitted photo)

More than a competitive eater

Besides his competitive eating, Joey Chestnut also has a retail line called Joey Chestnut Eats that sells sauces such as coney sauce, mustard, a hot chicken sauce and other products.

“Just his passion for food and eating and traveling and wanting to try all these new flavors, and I asked him, ‘You’re always promoting other businesses, why not create something of your own that you can then market?’” Jones said.

Jones said he and Chestnut try to take some of Chestnut’s favorite flavors from competing in food competitions and find a way to put them in a bottle.

Chestnut sampled more than 75 sauces before deciding on the six he wanted to sell.

“He tested and tweaked and narrowed the field down until he found those exact flavor profiles,” Jones said.

Joey Chestnut Eats sauces are sold in approximately 1,500 stores in the Midwest. Locally, people can find them at Kroger and Meijer.