You are at:Home»Current in Zionsville»Zionsville Cover Stories»From golf course to park?: Couple aspires to establish a nature preserve in northern Zionsville

What once was a golf club has now become a nature conservation effort in northern Zionsville, and town officials hope it will one day become a public park.

In 2017, Wolf Run Golf Club closed, and Stan Burton, the then-owner of the 216-acre property, began fielding offers from developers, which many local residents opposed. But plans to sell the property stalled when the Zionsville Town Council and Zionsville Plan Commission denied a proposal to rezone the land and transform the former golf club into a neighborhood with up to 560 family homes and mixed-use buildings at the southwest corner of U.S. 421 and Ind. 32. Because the land was never rezoned, Burton continued to look for a buyer.

In the summer of 2020, Zionsville Mayor Emily Styron toured the property. She later contacted two Zionsville residents with a love for nature, and the three thought of a different vision for the property.

Because the town wasn’t in position to purchase the property, Zionsville residents Jim and Nancy Carpenter, in an informal agreement, purchased what is now Carpenter Nature Preserve in February for $5.5 million with the intent to one day sell it to the town at a discounted price — approximately $4 million — so that the town could then repurpose it as a public park.

Styron and Zionsville Deputy Mayor Julie Johns-Cole first toured the property the afternoon of July 10, 2020, with Burton, who told them a developer had approached him with plans to develop the land and build hundreds of homes. Styron said while touring the property they saw deer, eagles and other wildlife and that she began to picture another use for the property. Styron and Johns-Cole visited Burton at the golf club again in August to discuss alternative uses for the property, something other than development and residential space.

“Little Eagle Creek went through it, and Mother Nature had kind of taken over a lot of the golf cart pathways,” Styron said. “You could really start to see the wild coming back. This is like Little Eagle Creek to the north. We’ve got Starkey Park at the southern boundary of Zionsville, and if we had this property at the northern boundary, it would really solidify the ‘town within a park’ moniker.

“It is the crown jewel achievement of our administration if we could turn this into a park.”

Styron knew the town would need to raise funds to purchase the property, and the town’s various boards, commissions and the town council also would need to approve the acquisition at a future date, so she began calling people who she knew had a vested interest in Zionsville parks. One of the people she came into contact with was Nancy, who has been involved with Zionsville parks for 20 years. Styron invited Nancy to see the property.

“I said, ‘I believe you, like no one else I know, will understand the incredible opportunity securing this land has for us,’” Styron said.

Together, the Carpenters, who have been married for 38 years, have had a history of conservation. Jim, 68, founded Wild Birds Unlimited Inc., a franchisor of backyard bird-feeding and nature-specialty stores, in 1981. The company now has 360 locations in the U.S. and Canada, he said. Nancy, 65, grew up in a family of nature lovers and pursued related jobs, including as a science teacher and state park naturalist at Turkey Run State Park.

“We fell in love with the property,” Nancy said. “And when we heard there had been attempts to develop it into maybe 350 homes, we thought that would have been a terrible tragedy and recognized Zionsville needs green space for people and for wildlife, so we thought maybe we could jump in and help here since the town wasn’t in a position to purchase the property.”

The Carpenters have dedicated their lives to nature preservation, especially birds. Jim said bird populations have declined around the world in recent years and that the wildlife conservation will help protect endangered songbirds. A 2019 study published in Science, a leading scientific journal, found North American bird populations have declined by nearly 29 percent since 1970, likely because of lost natural habitats, Jim said. Their company, following the inventory’s publication, adopted a mission: save the songbirds. Jim said Carpenter Nature Preserve marries the interests of their company and their personal interests.

“We have been in business for 40 years, and this is just one way to give back to the community,” Jim said. “We’ve been here for 35 years. It’s just what we do. This is what we’ve done for 35 years is protect, and then, if we can, we donate.”

“We just can’t see a better legacy in our life to leave the world a little bit better place,” Nancy said. “You can’t take it with you, and I’ve always said to whom much is given, much is expected in this life. We’re not into buying yachts or into hiding money in bank accounts. This is what we want to do. It gives us a lot of joy.” 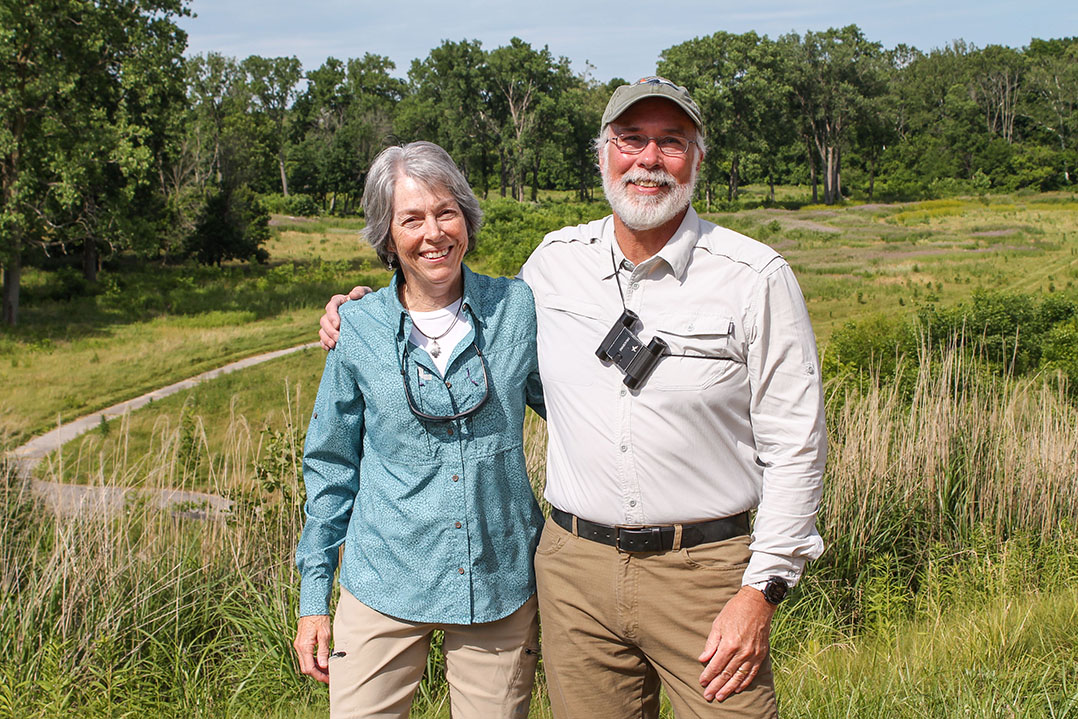 Jim and Nancy Carpenter have taken on the role of interim owners of the property. And while the town continues its goal of raising $4 million to purchase the property from the Carpenters, Jim and Nancy have begun planting trees, maintaining paths, controlling invasive trees, consulting experts and repurposing the land.

“Philosophically, what we hope is that the people of Zionsville, the community can really rally behind this and that Zionsville as a town can fund this,” Nancy said. “This is really a culmination of the work we’ve done our whole lives.”

The couple spent the evening of June 17 at what used to be the golf club house on the property. Near sunset, they gazed out at their work.

“A mother doe with her newborn baby fawn, we could see her down on the No. 1 fairway, which is right down the hill from the clubhouse,” Jim said. “Then, another 50 yards behind her was a buck growing his antlers. Overhead, a bald eagle flies and lands in an old, dead tree trunk. And so that kind of paints the picture of what is happening for the transformation from a golf course to a nature preserve.”

Carpenter Nature Preserve is privately owned and not open to the public. The decision to open the property to the public will be made when and if the town can raise the funds needed to purchase it and turn it into a park, the Carpenters said. They expect repurposing the land and the town’s efforts to raise the funds will take several years.