You are at:Home»Current in Fishers»Fishers Cover Stories»Crossover dribble: Satterfield moves from coaching boys to girls basketball at HSE

When Huppenthal officially announced he was resigning, he talked with Satterfield more seriously about it for a day. Satterfield has a basketball-playing daughter, Blair, who will be an HSE Intermediate Junior High eighth-grader this fall.

“My head was spinning for 24 hours,” Satterfield said. “Then, I had to focus on our sectional. After the season was over, I talked to Hupp again and thought, maybe, but I’m not sure this is the right time. I talked to my wife, Deb, and dad about it. I was saying some prayers and said, ‘Hey, Lord, show me some signs.’” 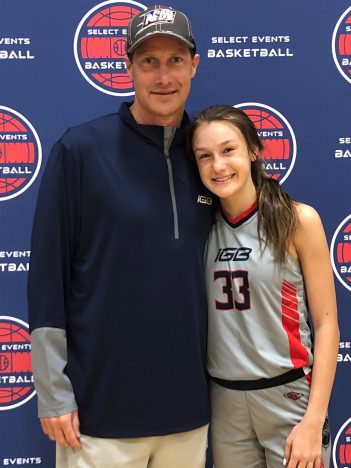 Brian Satterfield with his daughter Blair, who he will coach when she reaches high school in 2022. (Submitted photo).

Satterfield has been the assistant coach on his daughter’s travel basketball team since third grade. Driving her home from a soccer practice, Blair provided the sign.

“Out of the blue, she said ‘Dad, I love it when you coach me,’” Satterfield said.

After a conversation with HSE athletic director Jim Self, Satterfield decided to take over as girls coach after 20 seasons as the boys basketball coach. Satterfield had a record of 322-151 with three sectional titles and nine Hoosier Crossroads Conference titles.

The other thing that convinced him Satterfield to take the job was talking to his dad, Gary, a former Tri-West High School principal. Gary would occasionally miss seeing Satterfield and his younger brother, Mark, play basketball at Plainfield High School.

“At a minimum, I would miss 50 percent of Blair’s games when she gets to high school,” Satterfield said. “That ended up being the biggest factor. This allows me to have a lot more family time.”

Satterfield’s son, Nolan, will be a senior member of the cross country team in the fall. He was ninth in the IHSAA cross country state finals in 2020.

Satterfield, 53, said he will benefit from Huppenthal still being a teacher in the building, and he can assist new basketball coach John Ashworth.

“I know I’m going to pick Hupp’s brain about opponents,” Satterfield said. “The same is true with John. Whatever he needs help with, he knows I’m only a phone call away.”

Makayla Hinshaw, who will be a senior and two-year starter, said the transition has been smooth during summer practice.

“As much as I loved Hupp, it’s been great having (Satterfield) as well as learning new ideas,” Hinshaw said. “He comes with years of experience coaching boys, so I’m excited to see what he does on the girls side.”

Ashworth said having Satterfield’s help will be a big benefit.

“Having Brian is a huge resource because usually when you take over a program, it’s under bad circumstances. The coach got fired or the coach left, so you’re coming in kind of blind to what was done before,” Ashworth said. “Having Brian one door down is going to be a great resource. He’s been super helpful so far. Anytime you have a great coach like that and someone you can lean on and get advice from, (it) just makes my job a little bit easier.”

Ashworth said there is great stability in the program.

“It’s a great community, a great school. It’s an attractive job, obviously,” he said. “This was not only a basketball decision but a family decision as well.”

Ashworth said he and his wife, Rayven, and two young daughters plan to move from Camby to be closer to HSE.

“I’m 32, and I always make fun of my high school head coach, Mark James, that he’s been a head coach longer than I’ve been alive,” he said.

“I’m definitely still learning and improving as a coach, but I don’t think my youth is a disadvantage,” he said. “I think it’s an advantage because I’m young and hungry. I do a good job relating to the kids.”

Ashworth said he draws a little bit from each coach in his past.

“There is no one better at preparation and dedication to the craft than Mark James,” he said. “Playing for Ron Hunter, he was as intense and demanding as it gets. Coaching with John Rockey at Franklin Central, he comes from a baseball background and was very laid-back, but in a good way. I have a lot of different perspectives, but at the end of the day, I have to coach with what fits me.”

His father, Bob Ashworth, and grandfather, George Ashworth, are both Indiana Hall of Fame football coaches.

“Coaching is in my blood,” he said. “Growing up in a coaching family has helped prepare me for the lifestyle and what it takes to be successful.”