You are at:Home»Current in Carmel»Carmel Community»Development of The Bridges in Carmel, The Farm at Zionsville moving forward after family lawsuits settled 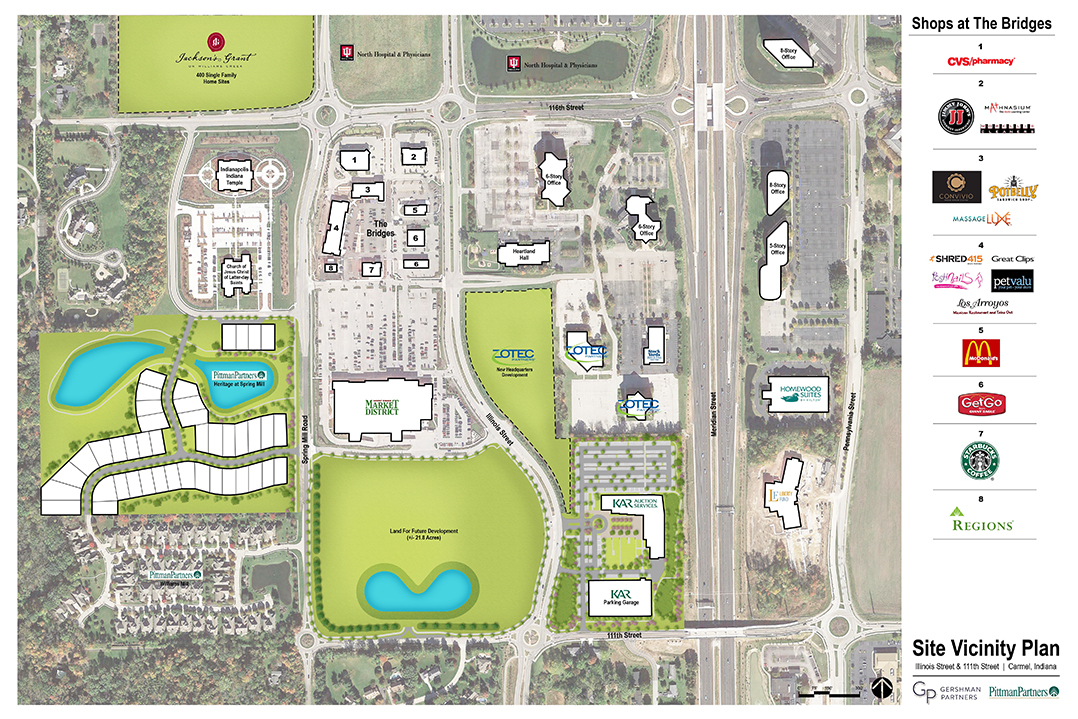 Plans are moving forward to develop 21 acres south of Market District in The Bridges. (Submitted photo)

For several years after receiving approval from local officials, two major development projects got put on hold in Carmel and Zionsville as the landowning family battled in court over the future of the sites.

But the development of a future phase of The Bridges in Carmel and The Farm at Zionsville are moving forward again after the Pittman family settled its lawsuits in late October 2020. The settlement gives full ownership of the sites to Indiana brothers Steve, Scott and Chad Pittman, who must make payments over several years to their siblings Mark Pittman and Anne Kelton, who live on the West Coast.

“In my opinion, the settlement provides the West Coast Pittmans with what they wanted, which was money, and the Indiana Pittmans what they wanted, and that was the ownership of the companies which owned the land so that the Indiana Pittmans could fulfill the vision that was established with the approval of our PUDs,” said Steve Pittman, who has developed several other projects in and around Hamilton County.

The siblings went to court following the 2014 death of their father, John Pittman. Steve Pittman declined to discuss details of the lawsuits, settlement and lasting impact on the family, but he described the events of the past several years as an “extremely challenging” and an “eye-opening time.”

“The three Indiana families are closer than we’ve ever been, very aligned not only in our business philosophies but our friendships with our families and cousins than we’ve ever been,” he said. “On the one hand, it was a tragedy that something like that would happen, but on the other hand, the three Indiana families have come out stronger and closer than we would have without that.”

Mark Pittman and Kelton also declined to elaborate on the matter.

“Our case has been resolved, and I look forward to the successful development of the properties,” they stated in an email.

With the court battles behind them, Steve Pittman said he and his brothers are ready to move on.

“The Indiana Pittman families are super-excited to finish what we started,” Steve Pittman said.

The Carmel City Council approved plans for The Bridges in 2011, and since then, the northern portion of the site south of 116th Street between Illinois Street and Spring Mill Road has been developed with retailers that include Market District, McDonald’s, CVS and several others.

The retail portion of The Bridges was sold in March 2017, and a parcel east of Illinois Street was sold to Zotec Partners to build its new headquarters.

Now that the lawsuits are settled, Steve Pittman said he can move forward developing the 22-acre southern portion of the site from south of Market District to 111th Street. According to the planned unit development document approved by the city council, hotels, office buildings and up to 300 multifamily units are permitted on the site.

Steve Pittman said he’s having “very specific conversations” to bring a luxury multifamily community to the western half of the site with hospitality and office uses to the east. He hopes to have an announcement with more specific details by the end of the year.

The Bridges was the first mixed-use planned unit development approved west of Meridian Street in Carmel. Originally planned as a $100 million project, Steve Pittman said the final version is expected to be worth more than $200 million.

The Farm at Zionsville

The Zionsville Town Council approved plans for The Farm at Zionsville, on the southwest corner of Sycamore Street and Michigan Road, in 2013. Two years later, Kroger announced it planned to build a Fresh Fare grocery store to anchor the 62-acre site.

Approved uses for The Farm include 225,000 square feet of office and retail space and up to 400 multifamily units.

But eight years after gaining the town council’s approval, the site remains vacant beyond the structures that were once part of the family farm.

“We anticipate that before the end of the year we will be moving forward with a plan for probably the first 300 multifamily units,” he said. “We’re talking to some retail and office users there as well.”

Kroger has pulled its plans to build a Fresh Fare on the site, as it acquired two nearby former Marsh supermarket buildings after the chain went out of business in 2017. Steve Pittman said he’d still like to see a grocery store as part of the development and that some grocers have expressed interest, but none have committed at this point.

Steve Pittman said he would like to have seen development of The Farm, which he views as a gateway to Zionsville, happen by now, but he believes the property has become more desirable over time.

“We think this is one of the best retail locations in the Indianapolis (area),” he said. “Regardless of the pandemic and reports on the death of retail, this is still a very viable and dynamic area where retail is going to want to locate.”