You are at:Home»Current in Carmel»Carmel Community»Carmel’s Dunn to take in All-Star experience despite injury

For Bridget Dunn, the best part of being on the 2021 Indiana Girls All-Star basketball team is being on the same side as her teammates instead of playing against them.

Although the recent Carmel High School graduate can’t play as she recovers from a torn ACL in her left knee, she is taking part in the activities.

“All-Star week I will be doing everything on and off the court with the team except the drills that involve contact,” she said.

Dunn said her surgeon said she should be ready to play her freshman season at Kent State University.

“So far, my rehab has been going well and I seem to be on track in my progression,” Dunn said. “I feel like I have come a long way in these four months since my surgery, which is very encouraging. I’m looking forward to getting back on the court and playing again.”

The 6-foot-3 Dunn played eight games before being injured.

“She does a little bit of everything,” CHS coach Erin Trimpe said. “She led our team in assists, blocks and steals prior to going down. She can score anywhere on the court. She’s a phenomenal shooter. She has a very high basketball IQ and is an all-around leader on the floor.”

Dunn was averaging 14.3 points and 6.5 rebounds before being injured. She averaged 12.4 points and 9.9 rebounds as a junior.

Dunn’s teammate Kate Clarke was named as a Junior All-Star.

“She is really an elite scorer, especially against the schedule we play,” Trimpe said. 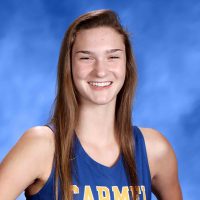 The 6-1 Clarke, who has made a verbal commitment to the University of Michigan, averaged 18.3 points and 3.2 rebounds last season.

“I’m looking forward to being able to play with some of the top girls in the state,” Clarke said. “It’s such a great opportunity.”

Clarke is hoping this is the first step toward becoming a senior All-Star in 2022.

“Being a senior All-Star is a huge honor, and ever since I started playing high school ball it’s been something I’ve been striving toward,” she said.