Joshua Thompson has been waiting awhile to make his debut at the Palladium at the Center of the Performing Arts, which opened in 2011 in Carmel.

“I remember when the Palladium was being built, thinking one day I’m going to get to play there,” he said. “That day is here.” 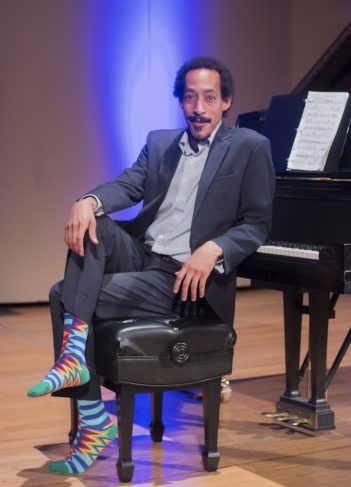 Thompson will perform in the Live at the Center series at 7:30 p.m. June 2. There will be a free livestream.

The Indianapolis resident was originally scheduled to perform in September 2020, but with COVID-19 cases surging, he decided to reschedule.

“The repertoire I do as a classical pianist and a music sociologist is exclusively around the research, programming and performing of classical masterworks written by composers of African descent,” Thompson said. “So much of the music is out there and very little gets played in programming, but fortunately, that is changing locally and nationally.”

The program is called “Black Keys: The Evolution of the Black Classical Arts.”

“It tells the story of how particular people have moved throughout the world and contributed to the arts, philosophy and literature and dance, and all those good things,” Thompson said.

Thompson said it is very much like a musical TED Talk, telling the origin story of humanity.

“I don’t just play the music,” Thompson said. “I get to introduce the pieces and composers. It’s really more musical storytelling, and the piano happens to be the instrument I use in order to do all that.”

Among the works featured are by composers William Grant Still and Florence Price.

“Price was a prolific but underperformed composer,” Thompsong said.

Another composer featured is Chevalier de St. Georges, who was a contemporary of Wolfgang Mozart.

Music selections span the 17th century to the 1960s.

“I throw a couple of Duke Ellington pieces in as well in the classical tradition,” Thompson said.

Thompson will be joined by vocalist AshLee Baskin and dancer Bae Savage.

“She is a tremendous vocalist and one of the Art and Soul featured artists for 2021,” Thompson said.