You are at:Home»Current in Westfield»Westfield Cover Stories»An uncertain future: Plans to widen Ind. 32 in jeopardy as Westfield council reconsidering agreement with INDOT

The Westfield City Council plans to move forward with introducing an ordinance at its May 10 meeting to terminate an interlocal agreement with INDOT to widen Ind. 32 between Poplar Street and Timberbrook Run.

Originally set to be introduced April 12, the council held off on introducing the ordinance to allow the city council – which has five different members from when the agreement was unanimously approved in 2018 – to work with the project team to address concerns. The efforts culminated with a public information session May 4 at the Grand Park Events Center, during which attendees watched a 20-minute video before visiting with City of Westfield, INDOT and American Structurepoint officials in an open house format to ask questions and share concerns. They also had the opportunity to leave comments and questions on a public feedback form.

Westfield City Council President Mike Johns called the event “extremely disappointing.” He said he had requested a meeting with the project team that would have allowed councilors and community members to discuss the matter and have questions addressed in front of other attendees.

Because that didn’t happen, and because he was told INDOT officials likely wouldn’t be able to attend the May 10 council meeting with such short notice, Johns said councilors decided in a May 5 pre-council meeting to introduce the ordinance terminating the agreement at their next meeting, although he said they do not plan to vote on it then.

Johns said he’s not sure why the May 4 event wasn’t structured as he requested, but he’s not yet comfortable moving forward with the project.

“We’re going to go back and do it again, and this time do it at Town Hall, and do it open to the public, and do what we asked for last night,” Johns said.

City of Westfield Communications Director Vicki Duncan Gardner said the May 4 session was organized “at significant cost and effort” to meet Johns’ request.

“More than 100 residents had an in-depth opportunity for good information to be exchanged in an open forum. The experts were there to answer all questions in the public forum.  It was also advertised as a special city council meeting so the entire council could attend and get questions asked and answered thoroughly,” she said.

She also said that Johns has been in various meetings with the project team as far back as January 2020 and has attended at least four meetings this year and that “every single issue related to this project has been asked and answered.”

Johns said he still has questions about the design of the project, but his primary concerns are potential cost overruns and a lack of transparency surrounding the 2018 vote.

“You have an agreement that was put in place with a total of a 16-minute discussion and vote back in October 2018 without having any public comment or any consideration for a period of time,” Johns said. “It’s an agreement which is an open checkbook. It’s a $15 million cost, and anything above the $15 million will be borne by the citizens of Westfield. I don’t think that’s a good agreement.”

The current cost estimate is $15.9 million, with historic mitigation activities in the Downtown Westfield Historic District leading to the increase. INDOT spokesperson Mallory Duncan said the mitigation efforts are critical to the project and that INDOT will pay for half of the cost.

The project’s impact extends far beyond the .6-mile construction zone. Connecting to its east, INDOT has plans to spend $35 million to reconstruct Ind. 32 between Westfield and Noblesville. Construction is planned to begin in 2025, but Duncan said that project “will be put in jeopardy” if Westfield terminates the interlocal agreement with INDOT.

Duncan Gardner said Westfield Mayor Andy Cook will ask the council to vote on the termination ordinance at the May 10 meeting, because he “is adamant that we cannot continue to spend taxpayer money if the council does not want to adhere to the will of the people and proceed with the project.”

“If councilor Johns does not want this project, as he has told the mayor, he should just be straight with the public,” Duncan Gardner said. “As it stands now, if councilor Johns is successful in killing the SR 32 reconstruction, the city will lose about $1.5 million spent thus far by either INDOT or our consultant, the future $35M SR32 upgrade between Westfield and Noblesville jeopardized, and our downtown will continue to have the capacity, public safety problems it has now.”

Johns said every member of the Westfield City Council believes Ind. 32 should be improved and that terminating the interlocal agreement with INDOT wouldn’t mean upgrades won’t happen. Instead, he’d like to see a new and improved agreement in place.

“It doesn’t mean we’re not going to support the project, but we sure as heck want to know what it is, and possibly we need to think about a new interlocal agreement,” Johns said. “Maybe we just need to revise the agreement a little bit, let’s tweak it, because what was good 2 1/2 years ago may not be the right numbers for today.”

Learn more about the project and submit feedback at structurepointpublic.com/sr32westfield. 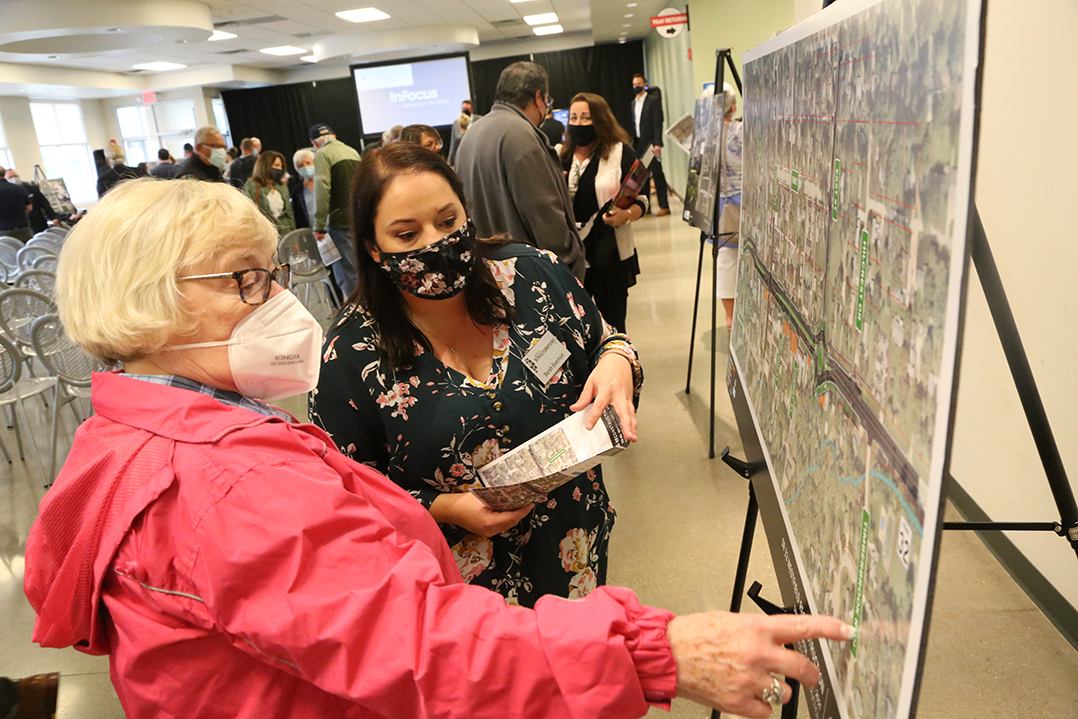 More than 100 community members attended the May 4 meeting at the Grand Park event center to ask questions and share concerns about the project to widen Ind. 32 through downtown Westfield.

Attendees shared their thoughts after the meeting:

“The impact of this is the first step in making sure the traffic flows from one side of the county to the other, thus impacting the counties east and west of us, too. The significance of it is very critical to central Indiana’s development.” — Ron Rothrock, Westfield resident

“It looks like (the project team has) done a fine job of really considering what the City of Westfield wanted and what they asked for, which satisfies me very much. Moving forward with this particular (project), they’re still going to have an open mind about some of the fine details that might be thrown in or taken out based on what the need might be.” – Ron Moore, Westfield resident

“I think what they’ve proposed is great. My concern is just our little intersection. Turning left into it is dangerous. We had one person killed and another badly injured, because people are going into and coming out of a 40 (mph zone) into a 30 (mph zone), which they don’t recognize sometimes, anyway.” – Marsha Alexander, Westfield resident in the Willow Creek neighborhood