You are at:Home»Current in Carmel»Carmel Community»Carmel, Lawrence North prepare to meet in Class 4A title basketball game

Carmel High School basketball coach Ryan Osborn isn’t sure how many one-possession games his team has been in, but he knows it’s been too many.

“I didn’t plan to live a long time to begin with, and now I feel like I’ve lost 10 years,” Osborn said. “You look at our scores every year and it feels like half of our games come to the last possession.”

The Class 4A No. 2 Greyhounds (25-2) edged Gary West 53-50 in overtime in the Lafayette Jefferson Semistate March 13 to advance to the Class 4A state championship against No. 3 Lawrence North (28-2) at 8:30 p.m. April 3 at Bankers Life Fieldhouse. With the NCAA Tournament having Sweet 16 games at Bankers Life Fieldhouse, the state championship games were moved from March 27 to April 3.

The occasion marks the third consecutive time Carmel has been to the state championship game and the fifth time in the last nine state finals. Carmel won in 2012, 2013 and 2019 and was runner-up in 2018. The Greyhounds won the sectional in 2020 before the postseason was canceled amid the COVID-19 pandemic.

Carmel’s only losses were by one point to Cathedral and Fishers. 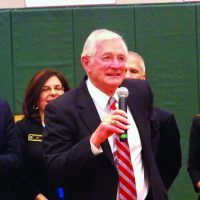 “They shoot so well,” Lawrence North coach Jack Keefer said. “If you don’t close out (on the shooter) or if you take a minute off defensively, they’re going to hit a shot. We weren’t as strong or alert as we should be, but they played very well. It will be a challenge to play with them and get them to play a little differently than they want to play.”

“I think defense is what gets you to a game like this,” Keefer said. “My goal is to get them to shoot one time in the first quarter and then maybe two times in the second quarter. They’re a very controlled group of guys and they don’t make many mistakes. So, you have to keep mistakes down and shoot at a high percentage.”

Osborn pointed out his team scored 63 points in the first meeting.

“There wasn’t anyone holding the ball,” Osborn said, laughing. “They may try to press us. I don’t know what they’ll do.”

The Greyhounds played that game without leading scorer Brian Waddell, who missed five games with a foot injury.

Osborn expects the Wildcats to be motivated.

“It’s hard to beat a team twice in the same year,” Osborn said.

Lawrence North slipped past Bloomington South 54-52 in the Seymour Semistate. This is Lawrence North’s first appearance in the state championship since winning three consecutive Class 4A state titles from 2004 to 2006 with standouts Greg Oden and Mike Conley Jr.

This is the 77-year-old Keefer’s 49th season as a head coach, with the last 45 at Lawrence North.

“We’re so much better than we were when we started the season,” Keefer said. “We were a team that could play a fast game and aggressive game, but we couldn’t play a slow-down game or an off-speed game. We’ve got the second-hardest schedule in the state and probably the hardest sectional in the state. By getting through all those different styles, we’ve learned to advance our game and we can play it a little more slowly than we would have early.”

Senior point guard Shamar Avance leads the Wildcats with averages of 17.8 points and 4.3 assists per game.

“Avance is our motor,” Keefer said. “I thought he played his most outstanding game in the semistate. As a team, we shot 56 percent. It was all his calmness. His message to the team was, ‘Hey, we’re behind and we’re going to catch up.’”

The 6-foot-7 Waddell, whose father Matt Waddell played at Purdue, leads the Greyhounds with a 15.6 points per game scoring average, followed by 6-5 junior guard Pete Suder at 11.7 points. Suder is the leading rebounder at 6.7 boards per game, followed by Waddell at 6.1 rebounds. Charlie Williams, a 6-10 junior forward, averages 7.1 points and 4.2 rebounds per game.