It didn’t take long for Van Betulius and Brayden Krueger to hit it off.

Both ardent Purdue fans, Betulius, a bus driver for students with special needs for Carmel Clay Schools, and Brayden, his only elementary school passenger during a school year radically altered by the COVID-19 pandemic, typically spend the trips between Brayden’s home and Woodbrook Elementary telling jokes and giving each other a hard time.

“Every time when he takes a while talking to one of my (instructional assistants), I’m like, ‘Get up here, or you’re going to get fired,’” Brayden, 11, said with a smile.

“A few months ago, Brayden was saying one of the highlights of his day is riding the school bus,” Liz said. “If he doesn’t get to see Van, it’s just not the same, that the day isn’t as much fun without his time with Van.”

The bus routes are a daily highlight for Betulius, too, who said connecting with the students is the best part of his job.

“What gets me with some of these kids, you look at their situation (and wonder) how they can be so happy, so loving and so positive,” Betulius said. “If you can make their day better in any way, shape or form, to me, you’ve done something to help out.”

Betulius, primarily a Carmel resident since the mid-1980s, began driving a school bus for CCS in 2017 after retiring from a job in sales.

He grew up on a farm near Evansville and became loyal to Purdue long before college, as his father was a Boilermaker alum who helped recruit future NFL player Bob Griese and local basketball legend Dave Schellhase to the school. Betulius and all four of his siblings, not surprisingly, ended up at Purdue.

“If we didn’t go to Purdue, we couldn’t live at home,” Betulius recalled with a laugh.

After graduating in 1976 with a degree in agriculture, Betulius worked for his father’s spray equipment company for 10 years before switching to a career in sales. During the following decades, he worked in various industries, including industrial, medical, pharmaceutical and engineering software.

But after retiring, he wasn’t ready to stop working. So, he became a bus driver, which gave him the opportunity to give back to his community and work with people with special needs. He said it’s been a perfect fit.

‘The kids are having fun’

For Betulius, being a bus driver goes far beyond the morning pickup and afternoon drop off.

When he finds out who will be riding his bus, Betulius calls their parents to introduce himself and learn how he can make the trip to and from school a positive experience. When the school year begins, he makes an effort to get to know every student on the bus, even though it takes a bit more work for those that are nonverbal.

“I’ve gotten so close to a lot of the families, and that makes it great,” Betulius said. “They trust me, and they know the kids are having fun.”

Betulius tries to build relationships beyond the school bus. It’s been harder during the pandemic, but during his time at CCS, he’s been to birthday parties, visited former passengers at work and on Christmas morning 2020 delivered treats from an Evansville shop to the Kruegers.

With Brayden, Betulius found a nearly instant bond in their shared love of Purdue. Brayden’s father, Todd Krueger, graduated from there, and Brayden has grown up watching the Boilermakers.

Brayden, who was born with cerebral palsy, said he’s been blessed with several great bus drivers through the years, but Betulius stands out.

“He’s the best driver I have ever had,” Brayden said. 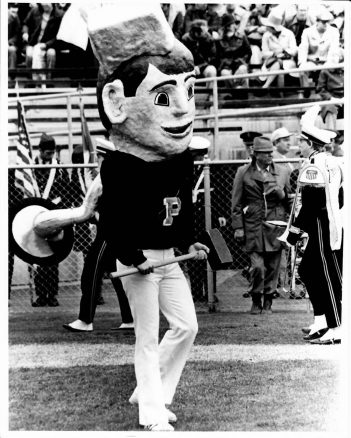 Van Betulius represented Purdue as the Purdue Pete mascot from 1975- 76. This photo from the Purdue archives is from that period and is likely Betulius. (Photo courtesy of Purdue University)

During his time at Purdue, Van Betulius became the face of the university, literally.

After an injury ended his wrestling career, some fraternity brothers encouraged Betulius to try out to be Purdue Pete, the school’s mascot. Betulius ended up with the role from 1975-76.

“Back then the head was 35 pounds. It had chicken wire inside papier-mache,” Betulius said. “It was heavy. It was hot.”