You are at:Home»Current in Zionsville»Zionsville Community»Zionsville family creates board game during holidays

Steve Donoho, his wife, Lisa, and their two children, Caleb and Kathleen, have enjoyed playing board games together for several years. During the past three months, the Zionsville family developed a prototype of their own card game called Robots Ate Our Pizza.

Steve said the idea came about in December 2020, when Caleb and Kathleen were home for the holidays. The family collaborated during the winter months to determine the rules, premise and game name.

Steve, a data scientist, programmed artificial intelligence algorithms to test the game. One day, the rest of the family wanted to know if Kathleen planned to finish her leftover pizza. The family often teased each other whether they could outwit Steve’s “robots” in a game, so Steve told Kathleen he would eat her pizza and blame it on the robots, which inspired the game’s name. 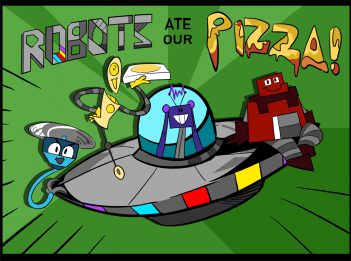 Robots Ate Our Pizza is a cooperative game, meaning players work together to win instead of competing against each other. (Submitted photo)

Robots Ate Our Pizza is a cooperative game, meaning players work together to win instead of competing against each other. The game is meant for two to six players, ages 8 and older.

“The thing I like most about the game is that because it is cooperative, players need to be aware of other players’ needs and goals, not just their own,” Steve said. “It is against the rules to communicate your goals explicitly. Instead, all players must be watchful of what other players need.”

During play, no player has complete information, Steve said, which the family hopes will encourage cooperation.

To raise funds to begin manufacturing the game, the family launched a Kickstarter campaign March 9, which will last 30 days. Through a Kickstarter website, at kickstarter.com/projects/stevedonoho/robots-ate-our-pizza-a-cooperative-select-and-pass-cardgame, supporters can pledge donations of $12, plus a $5 shipping cost, to receive a copy of the game. The family has reached its initial minimum goal of raising $1,300 dollars.

As of March 10, the Kickstarter campaign had raised more than $1,500. The funds will be used to manufacture the game, and supporters can expect to receive a copy of the game in two to three months, Steve said.

“I’m glad we did it,” Steve said. “There’s the real fun, creative stage, and now we’re at the grind-it-out phase of get the website set up, help people find out about it, the mailings, the grunt work. It’s been one of those tasks that have been hard but fulfilling.”