You are at:Home»Indiana»INDOT to direct motorists to use zipper merges in construction zones 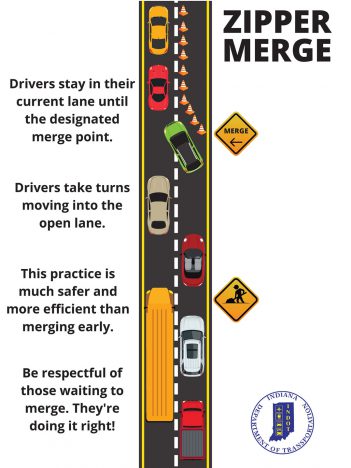 INDOT will use signage to direct motorists to use zipper merging in several construction zones this year in an effort to promote safety and ease congestion.

A zipper merge occurs at the point of a road closure, with drivers taking turns entering the construction zone. Signs will alert drivers to use all lanes until the merge point, then direct them to take turns merging at that point.

Mallory Duncan, INDOT communications director for the Greenfield District, said that many people move out of a lane to be closed as soon as they see a sign about the closure, which can often be well before the closure point. Such early merges can lead to drastic changes in speed, unexpected lane switches, serious crashes and road rage.

“A zipper merge is a lot safer for people, and it’s a lot faster,” Duncan said. “We don’t get that queueing in the work zone, whether it’s up a ramp or actually on the interstate.”

According to INDOT, zipper merges are beneficial because they reduce speed differences between two lanes, reduce queue length by up to 40 percent, reduce congestion, create a sense of fairness and equity that all lanes are moving at the same rate and bring order to the merging process.

Duncan said INDOT is trying to educate the public about zipper merges before construction season begins because many drivers don’t fully understand how they work and can become offended by others who try to use them.

“A lot of people think (zipper merging) is rude, but it’s actually a thing that can really help in construction zones,” she said.

Zipper merges are the “preferred” method for entering construction zones, Duncan said, but they aren’t always feasible, such as when backups are not present. Signage near the construction zone will alert drivers how to best navigate through the site.

Learn more about zipper merging and watch a video about how they work at bit.ly/INDOTZipperMerge.