You are at:Home»Current in Carmel»Carmel Community»Carmel bans gender-biased construction signs at request of young sisters 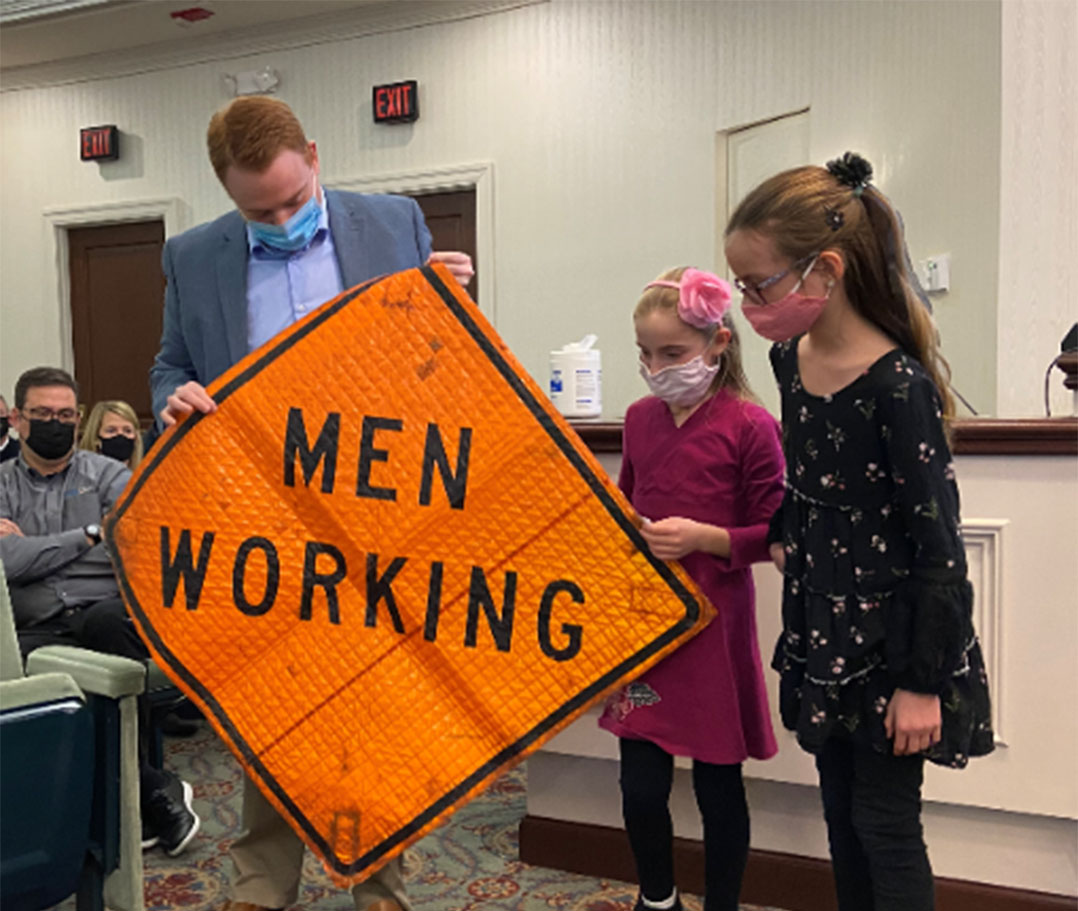 From left, City of Carmel Chief Deputy Clerk Jacob Quinn presents a ‘Men working’ sign found in city storage to Brienne and Blair Babione. City Council President Sue Finkam suggested to the girls they spray-paint it to say, “Women working,” destroy it or use it on the wall as “a reminder of how to advocate in a professional and powerful way.” (Photo by Ann Marie Shambaugh)

Sisters Blair and Brienne Babione were confused by the “Men Working” sign they saw near a construction zone on their way home from school.

They had seen women working in construction before, and they knew it is a career they could pursue someday if they choose. So, they decided to take action, writing letters to Carmel City Council President Sue Finkam.

“‘Men working’ signs are a problem, because when little girls see them, they might think, ‘Oh, I can’t be a construction worker, but I want to,’” Blair’s letter stated. “Seeing a little girl feel like that makes me sad.”

“Lots of construction people have been using ‘Men working’ signs, and I think it’s not right because girls can do anything,” Brienne stated in her letter.

The Cherry Tree Elementary students read their letters — and received a standing ovation — at the March 1 Carmel City Council meeting. During the meeting, the council approved a resolution banning gender-biased construction signage.

The move was largely symbolic because the National Highway Traffic Safety Administration issued a requirement in 1978 to phase out those types of signs within a decade. Finkam said the City of Carmel hasn’t used them for several years but that the signs the girls saw were displayed by a subcontractor.

The resolution passed a week before International Women’s Day, which this year is themed, “Choose to Challenge.” During the meeting, the council recognized more than a dozen female city employees working in fields typically staffed by men.

Finkam said the resolution is for the benefit of all Carmel residents.

“It also applies to men wanting to go into situations like nursing or be a stay-at-home parent, which is typically identified as a female occupation,” she said.

Leslie Babione, Blair and Brienne’s mother, hopes that her daughters’ willingness to speak up and Carmel’s new resolution will inspire other cities to do the same.

“We hope, by us calling attention to this matter, that we inspire others to know that their voices, big or small, can make an impact by getting involved in civic duty, learning how government and advocacy works and doing research on a cause you are called to before taking action,” Leslie Babione stated. “When we have conflicting views on a matter, then there’s opportunities for connection and for dialogue. Sparking conversation and listening to each other is the first step to making progress.”