The Westfield Washington Schools Board of Trustees conducted a town hall-style meeting Feb. 23 to seek community input in the search for a new superintendent.

Community comments mostly focused on wanting a superintendent who will advocate for students to return to school in-person full time, someone who values teachers and someone who plans to make diversity, equity and inclusion a top priority.

Only eight people attended the meeting, but which was aired live so members could watch from home.

Westfield resident Erica Strahm spoke first at the meeting and asked for a superintendent who supports the district’s teachers.

“It seemed like a lot of teachers weren’t able to say what they’re thinking and weren’t able to bring ideas to central office and felt like their voices were squashed,” Strahm said. “I don’t know how else to say it. I think teachers should be able to share thoughts and opinions without some kind of retribution or without (being blacklisted). And I think this goes without saying, I’d love for you guys to find a superintendent who’s interested in us going back to school full time in August.

“I don’t think I’m the only one thinking that we want somebody who’s on board with going back full time in August.”

Several others echoed Strahm’s comments. Board President Jimmy Cox read online comments sent to the school board. The first online commentor asked for a superintendent who is a “visionary leader focusing on diversity, equity and inclusion.”
Westfield Parents for Change, a group that formed in June 2020 after the national racial unrest and local protests regarding the Black Lives Matter movement, submitted written input online. But because the text was well above the 300-word limit, the board did not read the comments during the meeting.

Westfield Parents for Change co-founders Joey Mayer, Whitney Moore and Jennifer Byrd shared their thoughts after the meeting but did not attend in person.

“Our mantra is we want (the district) to be an inclusive environment for everyone,” Mayer said. “We want to live in a community where people were not afraid to be here.”
Mayer said the group has been meeting with school officials asking for a change in curriculum and discipline.

“In a new superintendent, we really want someone, (and) this sounds like a catch phrase, but we want them to bring in someone that understands where we’re going rather than where we’ve been,” Mayer said.

Mayer said Westfield Parents for Change is asking that diversity, equity and inclusion be weighed the same as other requirements in the job listing.

The job opening has been posted locally and nationally, and WWS is accepting applications through March 22. School board member Mike Steele said he hopes someone will be named by July. 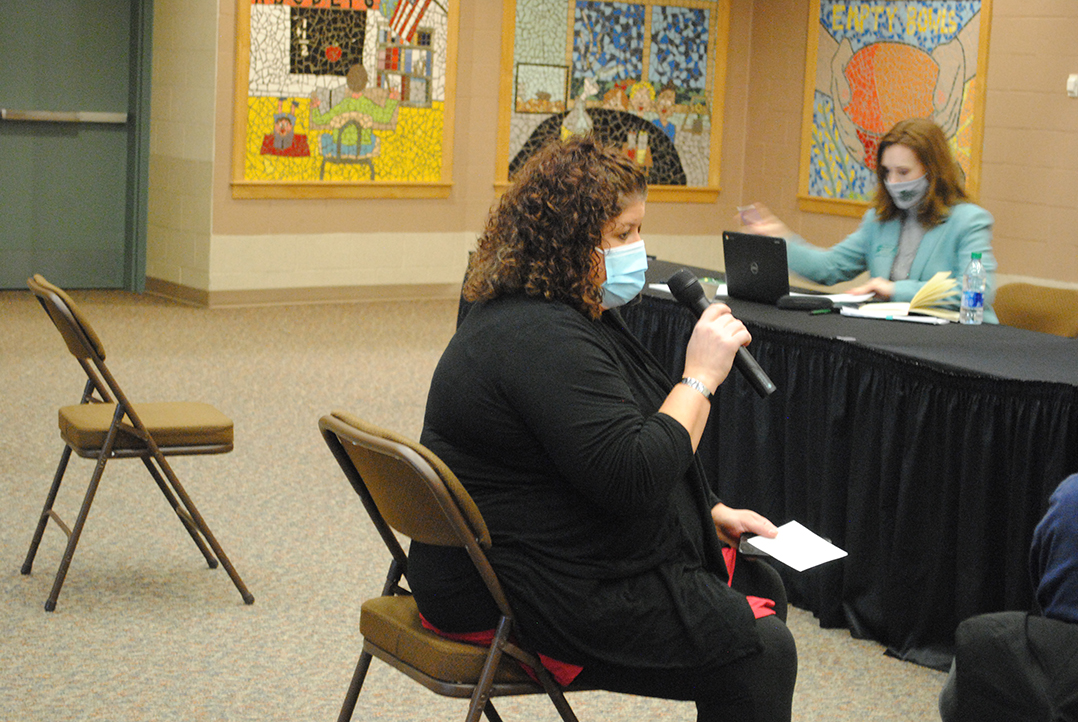 Another item some community members want to see in the search for a new superintendent is a thorough background check.

“I would like for you to do an extensive background check,” town hall attendee and Westfield resident Erica Strahm said. “I don’t just mean typical background stuff. I mean the person’s previous district. How where they really viewed and not just from their fans but find out if there’s other underlying issues in their previous district and what people really thought — not just their fans, but (what) the average taxpayer thought about the superintendent. Hopefully, that’s something you’ll dive into rather (than) taking a package from fans saying, ‘We love this person, they’re great.’”

“We’re not just going up to talk to teachers, but we will go to coffee shops and breakfast places and get opinions on their superintendent and everything else without showing a hand of what’s happening,” school board member Mike Steele said.