You are at:Home»Current in Carmel»Carmel Community»Carmel resident ends long run with NCAA

Dan Dutcher hated to leave Kansas City with his wife, Karen, and two young twin children when the NCAA moved its headquarters to Indianapolis in 1999. 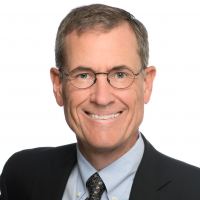 “We loved Kansas City. The quality of life was terrific,” said Dutcher, who has lived in Carmel since that NCAA move. “From Day One, the state of Indiana rolled out the red carpet for us. They were so encouraging. In some ways, I feel like they never rolled the carpet back up, it’s still out there.”

Dutcher, who retired at the end of January after 34 years with the NCAA, had been vice president of Division III since January 1996.

“The biggest change has been membership and growth,” Dutcher said of Division III. “We’re about 450 schools now, back in those days we were around 400, so we’ve added a lot of schools. We’ve seen a lot more conferences added. Then there were a lot more independents. A lot of that was spawned by automatic qualification, which was implemented  around 2000.”

Dutcher, who turns 62 March 2, had done some work for Division III before moving to it full time.

“When the NCAA restructured and made vice president positions for each of the Divisions in the mid-90s, it was like someone saying ‘how would you like to do what you like the best full time?’’’ he said. “I was delighted to be able to do it and I never really looked back. The D-III model is the one I feel the most affection for, philosophically it comes closest to what I perceive athletics to be all about. That doesn’t mean other divisions do a bad job, because they don’t.”

Dutcher, who received a bachelor’s degree from Notre Dame and a law degree from the University of Kansas, realized after two years of practicing law in his home state of Maine that it wasn’t for him. He moved to Kansas City to be near Karen, who was his girlfriend at the time.

One thing special to Dutcher is how quickly he was able to become involved with Carmel Clay Parks & Recreation. He spent eight years on the parks board and seven on the Carmel Plan Commission as the parks board representative.

Dutcher, who may do some consulting, is eager for international travel and concerts to return when the pandemic conditions ease. His twins, Anna and Michael, are both 2015 Guerin Catholic High School graduates working on their master’s degrees at IUPUI. Karen is the general counsel for Hoosier Cancer Research Network.