If there’s one thing Sue Johnson wants parents to be aware of during the COVID-19 pandemic, it’s the effects of MIS-C on children.

MIS-C, or multisystem inflammatory syndrome in children, is a condition where different body parts can become inflamed, including the heart, lungs, kidneys, brain, skin, eyes or gastrointestinal organs. The Centers for Disease Control and Prevention stated it is not sure what causes MIS-C, but many children with MIS-C had the virus that causes COVID-19 or had been around someone with COVID-19. 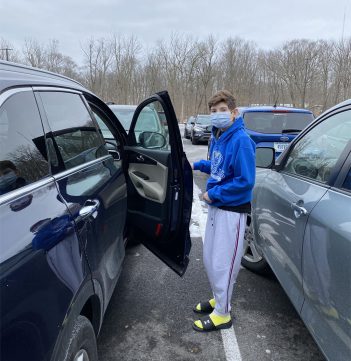 “He said his legs were weak and he had chills, and then the next morning he threw up and had a fever,” Johnson said. “(The pediatrician) said to take him in and get a COVID test, so we had a rapid COVID test and he did not have COVID at that point.”

However, Jax’s symptoms continued to worsen, and by Jan. 20 he had a 103-degree fever and couldn’t keep water down. After calling the pediatrician again, Johnson was instructed to take Jax to the nearest emergency room.

Upon arrival at Ascension St. Vincent Fishers Hospital on Olio Road, Jax’s temperature was 104. Despite hospital staff starting IVs and administering Tylenol and other medication, his temperature didn’t go below 103.1.

Jax also complained of belly pain, so doctors decided to do a CAT scan to check his appendix, which was enlarged, and his lymph nodes were very swollen. He was then transferred to Peyton Manning Children’s Hospital.

“Progressively through the night, Jax’s blood pressure would drop, his heart rate would drop, then accelerate, and he was in a lot of pain, and we couldn’t figure out where the pain was coming from,” Johnson said. “(The next day) they couldn’t get his fever down and there was pain, so they decided to keep him in the hospital.

“That Friday is when everything started going really south for us.”

Johnson said doctors had begun discussing MIS-C and were conducting several tests. Then, Jax’s heart rate, oxygen and blood pressure dropped, and he was having trouble breathing. X-rays showed his heart was “extremely enlarged” and his lungs were filled with fluid.

Despite inserting a PICC line and moving Jax to the ICU, his vitals still weren’t regulated.

“At that point, they got his blood test back and he tested positive for the COVID antibody, and they said he has the MIS-C diagnosis because he has the COVID antibody,” Johnson said. “They asked, ‘When did he have COVID?’ and we said he didn’t. They said with MIS-C, they have to be exposed to COVID or had COVID four to six weeks prior to the MIS-C symptoms presenting themselves, and looking at the time frame, that would be December (2020) for us, but he had not been sick.”

Johnson said it’s likely Jax had COVID-19 but was asymptomatic. He stayed in the ICU for seven days. During that time, Johnson said doctors were unable to stabilize his blood pressure or heart rate, and he still had a high fever and pain.

“Finally, on the seventh day, he was stable enough to be moved up onto the medical floor, but once he got up to the medical floor, he started having what they referred to as ‘episodes,’” Johnson said. “When he would stand up, his blood pressure would drop but his heart rate spiked, and it looked like he was having seizures, but it wasn’t a seizure. MIS-C attacks all the major organs in your body – your heart, lungs, muscles, anything blood runs through, so we thought maybe it’s starting to affect his brain.”

Another CAT scan didn’t show brain swelling, but when blood test results came back, Jax’s hemoglobin was at a 4 when it should have been at 13. So, he started receiving blood transfusions.

“We got the blood results back to where he could be mobile on his own, but his muscles were atrophied and weak,” Johnson said. “After 14 days, we were able to get him to the point where he could go home, so now we’re on this long road of recovery.”

“The reason I’m trying to get people aware of this, especially parents, is when all this started happening, they told me this thing about MIS-C, and I’m looking at them because I’ve never heard of this,” Johnson said. “They explained it’s very, very new, and the first case was diagnosed in New York in April of last year.”

“We were very lucky. He got very sick, but we are fortunate he’s on the way to recovery. If I continued to think it was the flu, who knows what would have happened at that point. When we saw everything going on and we had to leave the room, it did hit me that we could lose him. That’s what’s going through my mind.”

Johnson said a doctor told her there had been 32 cases of MIS-C in Indiana since the first diagnosis in April.

“So, it’s not something that’s very common,” she said. “Parents have to be an advocate for their child. If you start seeing these symptoms, don’t assume it’s the flu. If they don’t get better in a day or two, question your doctor. Ask them, ‘Have you heard of MIS-C, and if so, what are your thoughts?’ Especially if you know your child has been exposed or has had COVID, ask those questions of your doctor. It can be fatal. We were very lucky. He got very sick, but we are fortunate he’s on the way to recovery. If I continued to think it was the flu, who knows what would have happened at that point?

“When we saw everything going on and we had to leave the room, it did hit me that we could lose him. That’s what’s going through my mind.”

As for Jax and his recovery, Johnson said it’s a day-by-day process.

“Every day he starts with medications we are not used to,” she said. “Some days he looks like a normal kid, some days he’s tired and wants to sleep all day.”

Jax has nightmares and anxiety about returning to the hospital. He returned Feb. 17 to classes at Fishers Junior High School.