You are at:Home»Current in Fishers»Fishers Community»Hamilton Southeastern senior competes in LLS Students of the Year campaign

Hamilton Southeastern High School senior Alyssa Holmstrom was quickly sold on The Leukemia & Lymphoma Society’s mission after working on her friend and classmate Heidi Schlabach’s LLS Students of the Year Campaign in 2020. 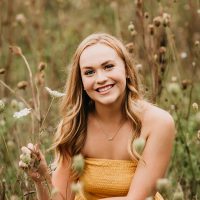 “After I saw how much LLS did for cancer patients around the nation, I was super motivated and did well as a team member. Each year, a candidate gets to nominate someone (to run),” Holmstrom said

Schlabach nominated Holmstrom for the 2021 Students of the Year Campaign.

“I’ve always been interested in medicine, and my dad works in a science-based career,” said Holmstrom, who plans to major in biochemistry on a pre-med track. “I’ve grown up with the idea I wanted to be a doctor. Being involved with LLS has helped me learn a ton about oncology and cancer research. It also helps me to be involved in our community.”

The Students of the Year campaign, which kicked off Jan. 21, ends with a virtual Grand Finale ceremony March 13.

“It’s nice for people this year that they don’t have to purchase tickets, so anybody can join to watch the Grand Finale this year,” Holmstrom said.

There are 16 teams running in Indianapolis. The goal is to raise the most money during the seven-week period. Candidates don’t reveal their goals.

“Everything has to be secret,” Homstrom said.

HSE junior Kendall Wynne is the Honored Hero for Indianapolis campaign. She was diagnosed with acute lymphoblastic leukemia in 2010. She had three years of chemotherapy and was in remission before a relapse in 2019. Wynne, who plans to go into nursing, has had several rounds of radiation and chemotherapy and had a stem cell transplant in 2020 and is doing well in her recovery. Holmstrom said she wants to get to know Wynne during the next several weeks.

Prior to LLS, Holmstrom had been involved with raising money for Riley Dance Marathon and her school choir.

“So, I had some ideas under my belt from those fundraising activities,” she said. “But this is a much larger scale fundraiser than what I had been doing.”

Holmstrom has set up a fundraiser with Ohana Donuts & Ice Cream, Fishers, for orders through Feb. 13. It started Jan. 30.