Lynn Croxton can often be found enjoying time on his neighborhood golf course, a place where he enjoyed a much different hobby in his younger days.

As a teen, Croxton judged livestock at Lynnwood Farm, a 623-acre property that is now home to Northview Church, Plum Creek golf course and surrounding neighborhoods.

Now 78, the Clinton County native moved to Plum Creek Farms in 2001 to be near the Plum Creek Golf Club, but he enjoys reminiscing about his younger days in and around the area. He remembers playing basketball in a Lynnwood Farm barn and winning the top prize at the Indiana State Fair after entering pigs descended from those he won in a contest from Lynnwood Farm.

“There was probably a subliminal attraction,” he said. “You think, ‘Yeah, that would be fun to live where you remember as a teenager.’”

One of the most visible reminders of the neighborhood’s past is nestled northwest of 126th Street and Plum Creek Boulevard in the form of a two-story corn crib, one of the few remaining buildings from Lynnwood Farms. Perched on land owned by the Plum Creek Farms Homeowners Association, as its condition deteriorated several years ago neighborhood leaders realized they needed to restore the structure or tear it down.

Several neighbors felt strongly about preserving the corn crib, a concrete and steel structure historically used to dry and store corn, even though they didn’t know how they’d afford repairing the cement, adding a fresh coat of paint and other needed upgrades. But with the help of Indiana Landmarks and the Carmel Historic Preservation Commission, they found a way.

“Having examples that are still standing and have made it this long into the 21st century is an opportunity to say, ‘Gosh, these places are 100 years old, so they’re a glimpse into an earlier era,” said Mark Dollase, Indiana Landmarks vice president of preservation services. “If we can find viable uses for them that make them an important, active part of life in this time, let’s try to keep them around as important lessons for our children and grandchildren for the future.” 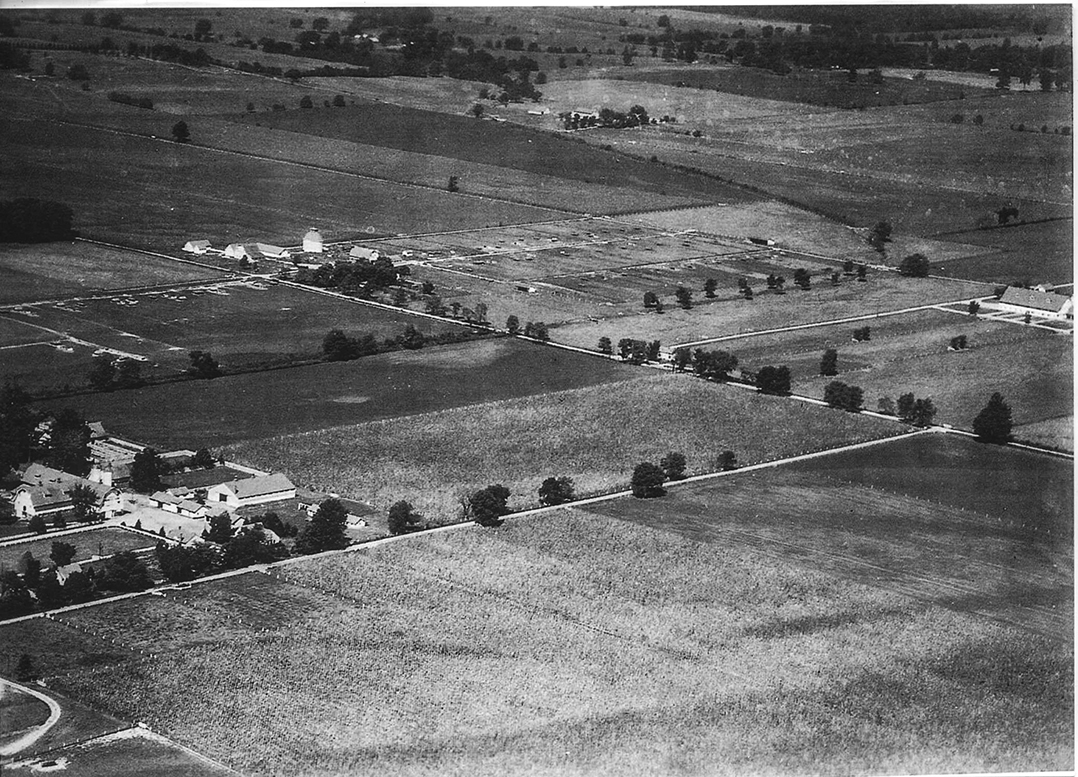 The corn crib at Lynnwood Farms can be seen north of the road that is now E. 126th Street. The surrounding buildings that were once part of the farm have been demolished. (Photo courtesy Carmel Clay Historical Society)

Initially, it wasn’t clear if the corn crib had enough support to be preserved. Results of a survey sent to Plum Creek Farms residents in 2011 revealed split opinions, but as work  progressed and the residents became more aware of the historic relevance of the corn crib, the project gained more support.

Those who felt strongly about saving the corn crib formed a committee and got to work, contacting a local attorney and preservation professionals about their options. The neighbors reached out to Indiana Landmarks, a statewide historic preservation organization, which helped them land a $10,000 grant from the Efroymson Family Fund through the Central Indiana Community Foundation to begin restoration efforts.

CHPC drew up a proposal, and in 2019 the Carmel City Council voted to approve the corn crib as a single-site conservation district. The corn crib joins the Larsen-Dunwoody House, a 1920s Tudor revival-style home, and the Morrison-Cartmel House, a 1966 home designed by Avriel Shull, as the only sites tagged a preservation district in Carmel.

Previously only used for storage, Plum Creek Farms residents expect the restored corn crib will be a prime spot for photographers, community meetings and other gatherings.

“It’s been perfectly preserved, and it’s in great structural order,” said Jerry Pachciarz, a Plum Creek Farms homeowner who helped lead the restoration effort. “It’s going to be a focal point of a lot of different things.”

Connecting the past, future

Dot Cord is among the Plum Creek Farms residents glad to see the corn crib remain a part of her neighborhood.

A Carmel resident since 1969, she remembers driving family members down the road to go see the lambs at Lynnwood Farm and admire its state-of-the-art buildings, including what she called the “beautiful” oval-shaped corn crib.

In 2000, she and her husband built a home in the Plum Creek neighborhood along the golf course. She walks 2 miles each day, with her route taking her past the restored corn crib. She often stops to reflect on the area’s rich history and incredible progress in recent decades.

“Today, Carmel, Indiana, is known as a world-class city, one in which its residents are proud to live in and call home,” Cord said. “But to fully understand and appreciate how today’s Carmel came to be, one must look at the past and take note of its evolution over time.” 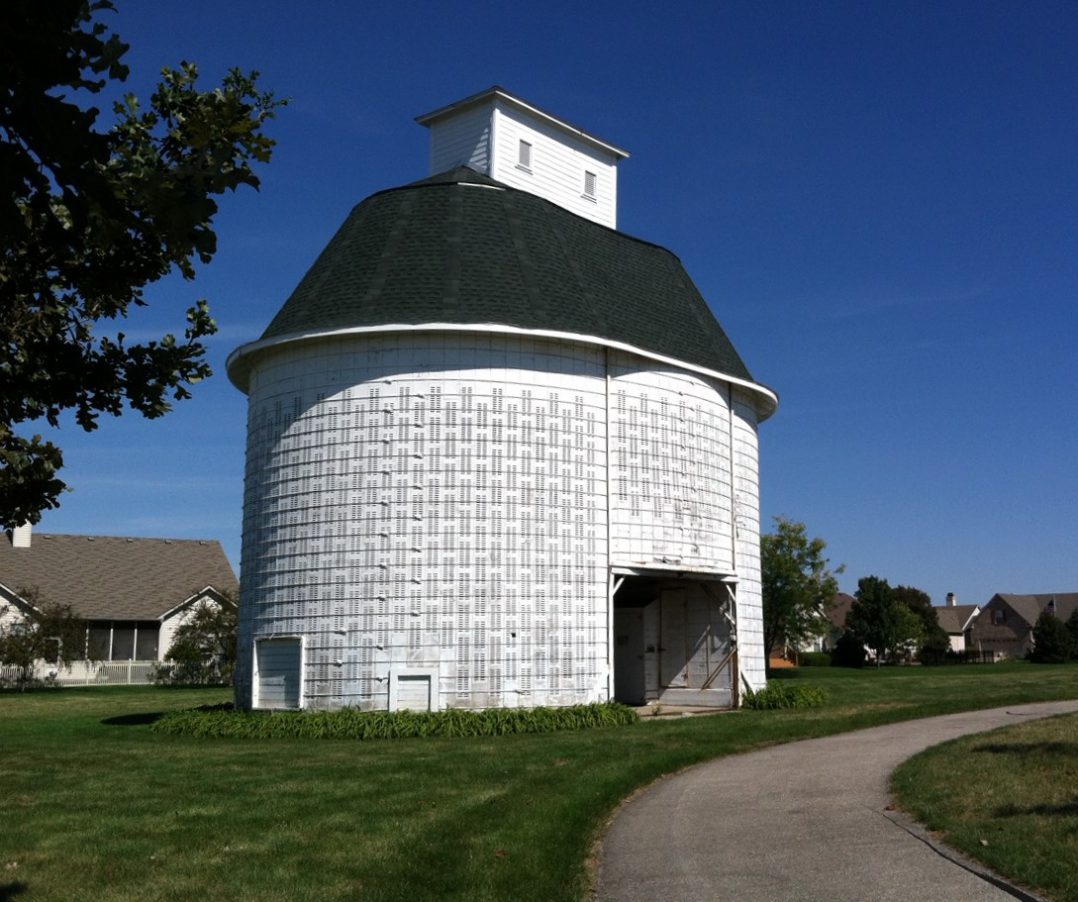 A brief history of Lynnwood Farm

Lynnwood Farm began operations in 1932 on its 623-acre site west of River Road and north of 122nd Street. Owned by Charles J. Lynn, executive vice president of Eli Lilly and Co., the farm was known for its award-winning percheron draft horses and swine.

In 1942, Lynn donated the farm and its livestock to Purdue University, which used the site to research livestock and agriculture until the late 1980s. As Carmel’s population grew and methods of agricultural research changed, Purdue began offloading the property, first selling 80 acres to Northview Christian Church in the mid-1980s.

In 1988, Purdue sold the remaining land to Browning Investments, which developed the Plum Creek golf course. designed by Pete Dye, and five subdivisions.

Other surviving buildings are the horse barn, the former Lynnwood office to the east of the barn and a show arena north of the barn.