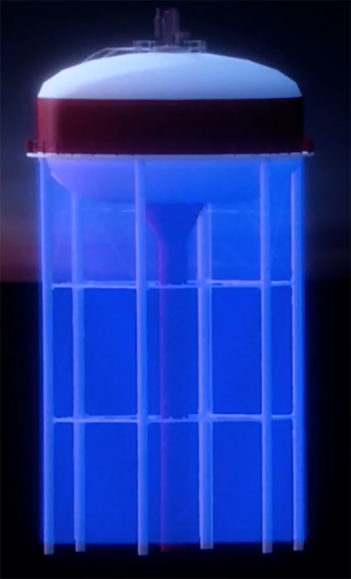 A light show on the Midtown water tower is among projects proposed to be funded by $125M in bonds. (Screenshot from finance committee meeting)

During a Jan. 7 meeting of the council’s finance committee, Brainard said the city plans to work with Ball State University’s Institute for Digital Intermedia Arts to create colorful, customized light shows on the water tower and 911 communications tower near the Monon Greenway in Midtown. The proposal sets aside $1.5 million for the project.

Brainard said enhancing the immovable infrastructure will do more than create a fun visual element. He sees it as an important tool to encourage employees and businesses to relocate to Carmel, a city without mountains or oceans or other natural attractions.

“The light show is fun, but it’s all about economic development,” Brainard said. “Not only is it nice that people already live here, but we’re talking about how do you recruit people here to fill those jobs so we get the next corporate headquarters? So those aesthetics are really important to our economic development.”

Brainard also proposed using the bonds to cover part of the cost of a new museum building for the Carmel Clay Historical Society. Brainard said Clay Township has committed $4 million to the project, which is estimated to cost $6.5 million.

“I think if we’re doing (the project) it makes sense to do it right,” Brainard said.

The finance committee will continue discussing the proposed bonds at its next meeting. A meeting date had not been announced as of press time.