You are at:Home»Current in Carmel»Carmel Community»2 children injured after robbery suspect flees from police 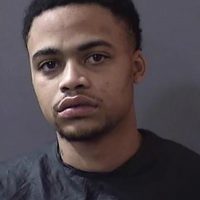 At 7:38 p.m. Dec. 26, Carmel police were dispatched to a robbery at Walgreens at 1424 S. Range Line Road. Police said an officer nearby saw a vehicle leave the area at a high rate of speed, but the driver, Michael L. Robinson, Jr. of Indianapolis, refused to stop until crashing his vehicle at 12401 Lynwood Blvd. He then fled on foot.

Officers found an adult male and a 6- and 1-year-old child inside the vehicle. The children were taken to the hospital with minor injuries.

Police used K9s and drones in their search for the driver, who was found in the 5400 block of Kenwood Place. He fled on foot again before being arrested a short time later, police said.

Robinson has been charged with robbery of a pharmacy, unlawful possession of a firearm (prior conviction), driving while suspended, possession of marijuana and two counts of resisting law enforcement.

Anyone with information on the incident is asked to contact the Carmel Police Dept. at 317-571-2500.