You are at:Home»Hamilton County»Tourism officials optimistic county’s hotels can weather pandemic until spring 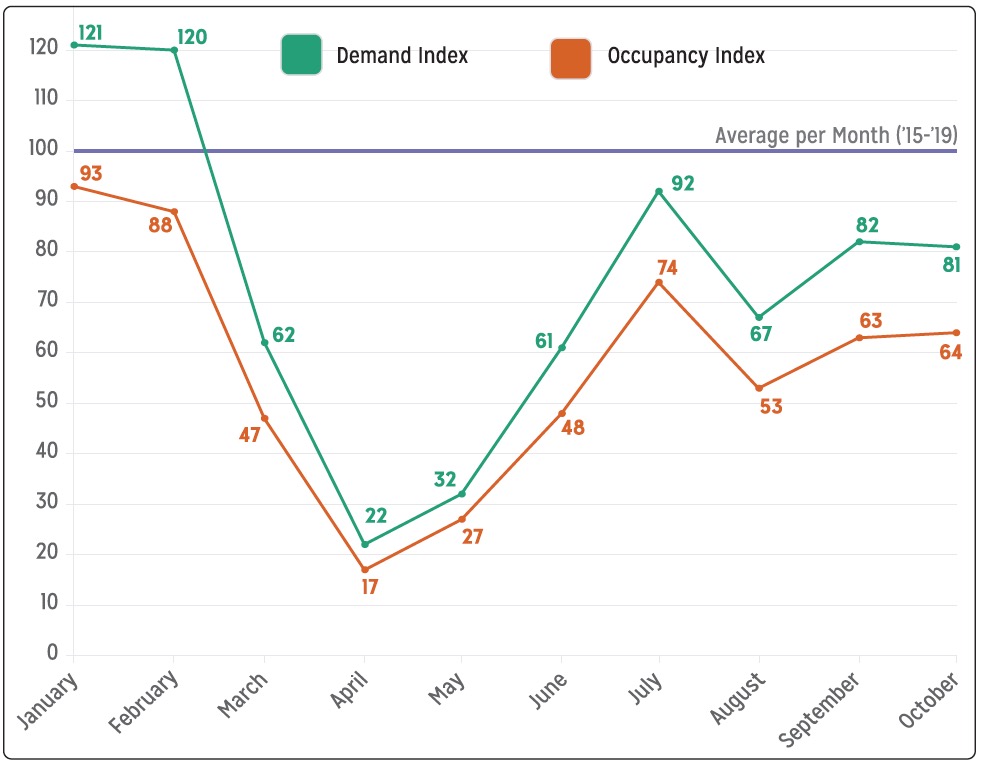 Hamilton County hotel demand was 20 percent above average in early 2020 and hit its lowest point in April. Hotel occupancy hit a low in April and peaked in July. (Source: Hamilton County Tourism)

At first, It looked like 2020 was going to be a record-setting year for Hamilton County’s tourism industry.

In January and February, hotel room demand was 20 percent higher than average, and tourism officials were optimistic the trend could continue throughout the year.

But in March, the COVID-19 pandemic reached Indiana, sending hotel room demand and occupancy rates plummeting. Demand bottomed out in April, when it was only 78 percent below what’s normally seen, and hotel room occupancy was 83 percent lower than normal.

Those numbers have climbed and stabilized, reaching a peak of only 8 percent below average demand in July. But with COVID-19 cases climbing as the industry prepares to enter its slowest time of the year, it’s unclear what that will mean for local hotels.

Hamilton County Tourism President/CEO Brenda Myers said she’s hearing from hoteliers that another lockdown would be ‘horrible.’ Without a shutdown, she expects most local hotels will be able to stay in operation long enough to weather the storm.

“I think they can make it through the winter,” she said. “I think everybody wants to get to the end of March.”

That’s when, she’s hoping, a COVID-19 vaccine will be nearing availability for the general public and mark the beginning of the end for the pandemic.

“That news alone, along with if Grand Park — which opened during the pandemic and has been able to work with the health department and the state to stay open — can (host youth sports events) at the end of March, that is going to be huge,” Myers said.

But with youth sports events winding down for the year, local hoteliers are hoping other types of travelers will soon be in town. Myers said as of mid-November, data from the short-term rental site Airbnb shows that bookings doubled for Thanksgiving and Christmas from 2019 to 2020. Myers believes that’s because many travelers want to visit family for the holidays but may not want to lodge with them. She hopes that will drive more business to local hotels.

Local hotels may get a boost in March if the NCAA decides to hold the entire March Madness tournament in the Indianapolis area. The tournament would bring dozens of teams to the area, and even if they stay primarily at Marion County hotels, Myers said Hamilton County is well positioned to welcome other travelers who are forced to look elsewhere for a place to stay.

Jordan Musall, Hamilton County Tourism data intelligence manager, said no Hamilton County hotels have closed permanently because of the pandemic, although some shuttered temporarily. He’s also optimistic that the county’s hotels are strong enough to survive the pandemic, because replacing one can be quite a challenge.

“Losing a hotel is very negatively impactful beyond the amount of time we’re facing this pandemic,” Musall said. “If (a hotel) was to go under, it would take years for (the area) to totally recover.”