Matt Bays loves that the Civic Theatre production of “Elf The Musical” is getting new life this holiday season. 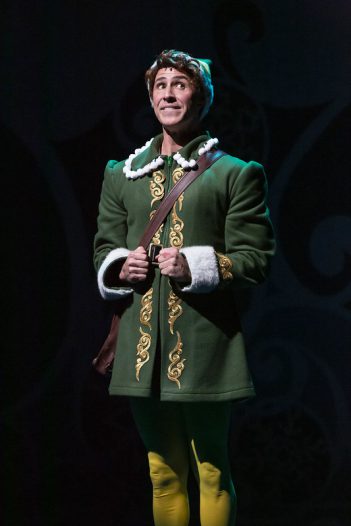 Originally, Civic Theatre planned to stage it live again in front of audiences this month, but that is not possible because of the COVID-19 pandemic. So, a recorded 2019 performance will be presented in a streaming or on-demand version through Dec. 26.

“Numerous churches and public venues are using Zoom, videoconferencing and online alternatives to connect with their people,” Bays said. “I was happy to see Civic making this available during the pandemic and continuing to spread the holiday cheer through this production of ‘Elf.’ I mean, we need it this year more than ever, and I’m honored to be a part of it in this way.”

The Westfield resident played Buddy in the musical.

“Was playing the role of Buddy fun? Um, yes. A total blast,” Bays said. “It was a lot of work keeping that level of energy throughout December, but I think our entire cast made it work. With people coming to see a musical version of this iconic movie, we knew the expectations were high. This didn’t worry us, it inspired us. And seeing audiences laughing with family and friends each performance made it all worth it.”

Bays said he would love nothing more than to play the role again in the future.

“As I’ve said before, there’s a bit of Buddy in me — maybe more than a bit,” he said. “I was decorated for Christmas the second week of November, my tree is up, and the presents are wrapped, ready and waiting. I’m that guy. Playing that role felt like a theatrical indulgence. I’m hopeful I’ll get the chance again.”

Bays said he might tweak his Buddy role if he plays it again.

“I’m sure I’d throw in some new things to keep it fresh, but I worked real hard on this part,” he said. “So, I left those performances knowing I gave my very best.”

Streamed shows will be at 7 p.m. Thursday, Fridays and Saturdays and 2 p.m. Saturdays and Sundays. There will be prerecorded interview segments with performers from the 2019 shows. For more, visit civictheatre.org.