You are at:Home»Current in Zionsville»Zionsville Community»‘It takes a village’: Zionsville community rallies around former coach after cancer diagnosis

After years of supporting young Zionsville football players and officiating high school games, Mike Naspinski, 50, has a new game plan to try and defeat a recent cancer diagnosis, and his former players are the ones supporting him. 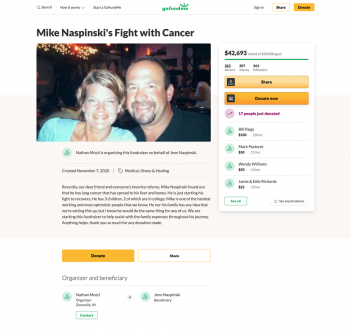 Mike Naspinski’s cancer battle is supported with a GoFundMe. (Screenshot)

Nine weeks ago, Naspinski, a Zionsville resident, felt pain on the left side of his torso. Initially, he dismissed it as muscle pain, but in late October, when it progressed to his stomach and back, he went to an emergency room. After several tests, he was diagnosed with a rare form of incurable lung cancer. He is taking medication to treat the disease. He received the news alone because his wife, Jennifer, wasn’t allowed in the room because of COVID-19 restrictions.

“That was one of the toughest things anybody can ever feel,” Naspinski said.

Naspinski has officiated high school football for 21 years and coached Zionsville youth football and baseball teams when his children – Allyson, Bri and Jake – were involved in the sports. He was on the Zionsville Youth Football League for several years and was president for one year. He said it had been “a treat and a blessing” to interact and bond with the kids and families in Zionsville.

Through his involvement in youth sports, Naspinski got to know many children during their formative years, one of which was Nathan Mutzl, one of Jake’s close friends and one of the Naspinskis’ neighbors. Mutzl is a junior at Purdue University. When he heard about Naspinski’s diagnosis, he and Lucas Brown, a sophmore at Purdue and a friend of the Naspinski family, created a GoFundMe page to support Naspinski.

“We decided they would do the same thing if this scenario came up,” Mutzl said.

Soon after, donations and messages of encouragement flooded the page. As of press time, the GoFundMe has raised more than $41,000 from more than 350 donors, most of them either former players Naspinski coached or their parents.

Naspinski was unaware of the page until several days after it launched.

“My wife started getting texts from people saying, ‘We just heard the news.’ And we thought, ‘How? We haven’t really told anybody yet,” Naspinski said. “And they said, ‘You’ve got to check this out.’ I was blown away. And some of the notes and letters from some of my former players and players’ parents were very heartfelt, very touching. That’s been very emotional seeing kids I coached eight and 10 years ago reaching out and saying, ‘Hey, coach, you’ve got this.’ That has really touched me greatly.

“When we moved to Zionsville 19 years ago, we loved the school system, we liked the small-town atmosphere, and we couldn’t have handpicked a better community to move to. They say it takes a village, and we found our village here.”

Naspinski began treatment on Nov. 19. He said the community support has been inspiring as he battles the disease.

“We’re just now at the beginning of this journey, but people’s kindness and generosity is hard to imagine and comprehend,” Naspinksi said. “It’s lifted me. Every time I talk to somebody and see the prayers and the support team I have behind me, that lifts me up. I’m a firm believer in the power of prayer, and the more people I have in my corner, the better off I’ll be.”