The Courtyards of Carmel will consist of 149 homes for people 55 and older. (Submitted rendering)

The Carmel City Council voted 5-4 at its Nov. 16 meeting to approve a planned unit development for The Courtyards of Carmel, which will bring 149 age-restricted homes to 59 acres on the northeast corner of Smoky Row Road and Keystone Parkway.

Ohio-based Epcon Communities will develop the neighborhood, which will have homes for empty-nesters ranging from $375,000 to $575,000. Previously developers said they expected construction to begin in spring 2021.

Epcon made several revisions to the project as it moved through the approval process, including reducing the number of homes from 169 to 149, creating a plan to preserve a historic home on site and adding traffic control measures. 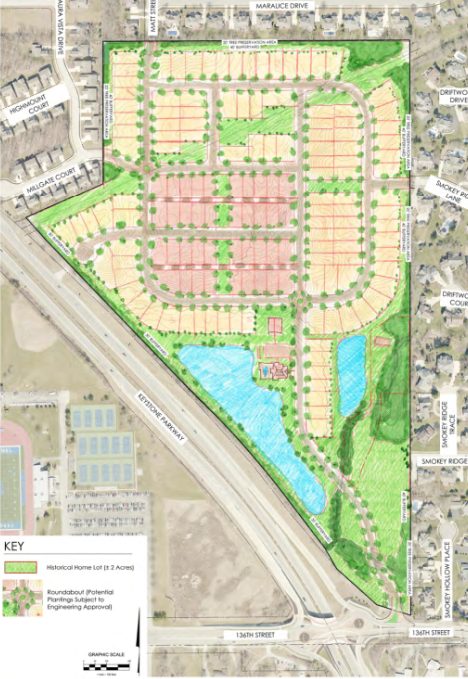 The Courtyards of Carmel will consist of 149 homes for people 55 and older. (Submitted rendering)

Several nearby residents remonstrated against the project in previous meetings, citing increased traffic, a lack of screening and density as top concerns.

Councilor Jeff Worrell voted in favor of the project, but he said he wrestled for weeks with the decision. In the end, he said he felt confident his concerns would be addressed by the creation of a buffer with tree preservation and plantings, that traffic wouldn’t increase much at peak hours because of the age of the residents and because the neighborhood maintenance will be completed by a homeowner’s association.

“I view this as a protection for (the adjacent) neighborhood, and I frankly don’t think it’s received enough credit,” Worrell said.

Councilor Miles Nelson, who joined councilors Tony Green, Tim Hannon and Bruce Kimball in voting against the project, said he saw too many unresolved issues between the developer and nearby residents to support it.

“I feel there is still too much distance between both sides,” he said.