You are at:Home»Current in Carmel»Carmel Community»COVID cases rise in Carmel, mayor expects first doses of vaccine this month 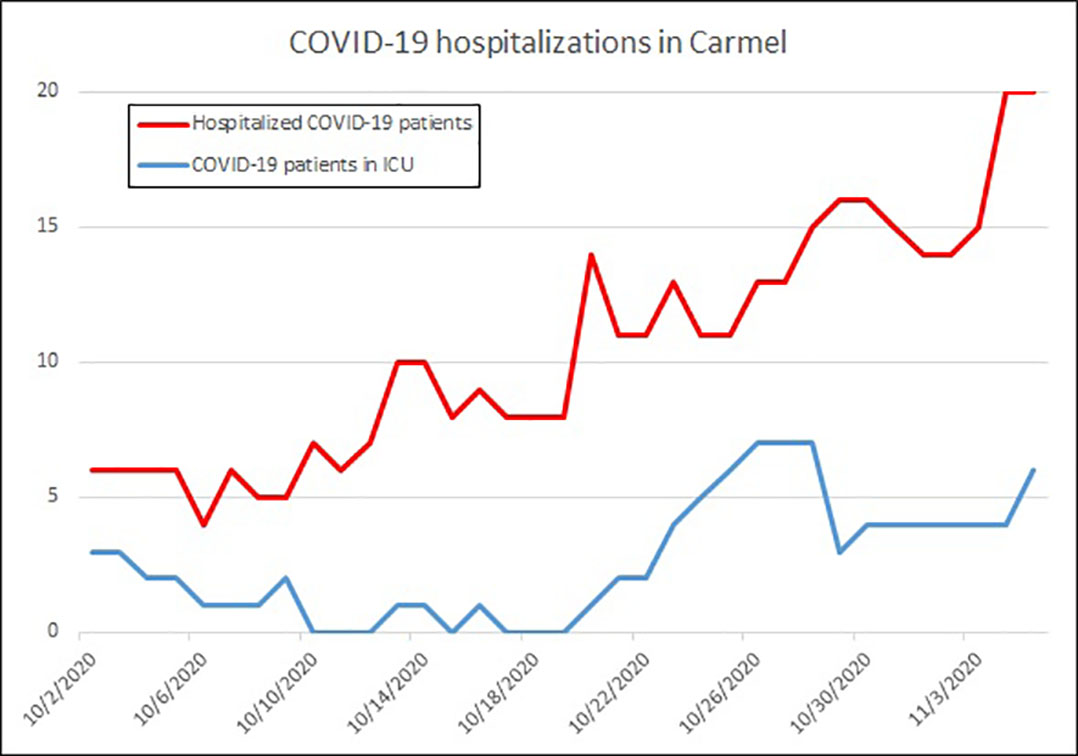 As COVID-19 cases rise throughout the nation, Carmel is not immune.

The city has seen its caseload rise in recent days on all sides of town, and its two hospitals had a combined record number of COVID patients on Nov. 4 with 20 people admitted battling the virus.

The City of Carmel has also reflected an increase in positive COVID cases in its weekly tests of employees that interact with the public. The city announced Nov. 6 that it would shut down City Hall through Nov. 20 after four cases were reported among employees in the building. These were the first positive cases among employees working in City Hall since the building reopened July 6.

Brainard said he and other mayors in the county plan to meet with county commissioners and health department officials on Nov. 9 to discuss the rising caseloads and regional strategies to combat them. He said he was pleased to hear that Indianapolis Mayor Joe Hogsett wants to work with officials in neighboring counties to stop the spread as well. In the spring, Indianapolis had stricter regulations to stop the spread of COVID-19 than its neighbors.

“Thousands of (Indianapolis) residents came here to use our restaurants. That didn’t make a lot of sense,” Brainard said. “We ought to try to have consistent rules throughout the region.”

Brainard didn’t say whether he expects Carmel or other municipalities to implement new restrictions to stop the spread of COVID-19, but he pointed out that contact tracers have determined that most of the recent surge has been caused by private gatherings in homes rather than in schools, shops or other public settings.

“You feel safe in your home, but apparently that’s where the spread is happening,” he said. “To be able to tap this down until we have a vaccine in a few weeks we’re going to have to continue to wash our hands, wear a mask and probably not have lots of people into your house.”

Brainard said he expects a vaccine — which has not yet been approved by the FDA — to start being distributed in Hamilton County the week of Thanksgiving. He said it will first be distributed to healthcare workers and first responders.

The Hamilton County Health Dept. did not respond to a request for comment on the pending vaccine as of press time.