You are at:Home»Current in Fishers»Fishers Community»Humane Society aims to align city animal ordinances

The Fishers City Council has unanimously approved to align its animal ordinance with Hamilton County’s. The Humane Society for Hamilton County is working to ensure each city’s ordinances align with the county’s for consistency. 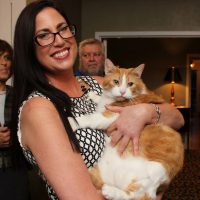 Rebecca Stevens, president and CEO of the Humane Society for Hamilton County, at a past Wine, Wags & Whiskers event. (File photo)

“It came out of the situation in Arcadia where there was a German shepherd breeder who had fallen under scrutiny in the news,” HSHC Executive Director Rebecca Stevens said. “It was so cold, and a lot of the dogs were left outside, and people were unhappy. Our ordinance at the time didn’t have any language regarding temperature or anything. It was incredibly outdated.”

“We did our work and research, looking at ordinances across the country and best practices,” Stevens said. “We looked at Marion County and we took what we thought was the best of all these and put together a proposal approved in Hamilton County at the county level in September 2019.”

Each municipality, however, had its own animal ordinance and enforcement mechanisms. Now, Stevens is working to align Carmel, Fishers, Noblesville and Westfield’s animal ordinances with the county’s. Carmel has already approved the new ordinance, and Fishers did so at its October council meeting. Stevens plans to target Westfield next.

“All the cities should essentially adopt the same language in order for there to be consistency across the county when it comes to animal ordinances and our ability to consistently educate people and enforce it,” Stevens said. “We were getting calls at the Humane Society about dogs tied up outside, and it’s zero degrees or animal cruelty cases, and it has been an ongoing battle for us to achieve consistency and something that’s comprehensive and be able to really educate and inform the public of what’s acceptable or not.”

Stevens hopes Westfield and Noblesville will align their ordinances with the county’s by year’s end.

“It’s a huge win. It’s long overdue, and I think it’s a win for everybody,” Stevens said. “I think we thought about the process really strategically in terms of it being done by both an animal welfare advocate alongside a law enforcement officer, because we wanted to make sure from both perspectives it was covered.”