You are at:Home»Lifestyle»55 and Better»Backstage Babble: Kingston serves as Palladium concierge to the stars

As a concierge for the Center for the Performing Arts, Ellen Kingston has gotten opportunities to meet with countless celebrities, ranging from Tony Bennett to Diana Ross to David Crosby.

“The best part is meeting all these world-famous people and spending a day with them,” she said.

Kingston, 65, served as concierge until a year ago when she got an assistant and is now concierge services manager for the Carmel venue.

“That just means I don’t have to run every single show because it was killing me, to be honest,” she said. “I oversee how we take care of all our artists and also write and produce the gala every year. That’s a cool, creative part of my job.”

Kingston is writing a book about her experiences.

“I’ve met Tony Bennett, Liza Minnelli and Mitzi Gaynor, Kristin Chenoweth,” she said. “When you spend a day with them, it’s amazing how much time you get to spend with them and share the day. We arrange the ground travel, the hotels and the meals, which is a big part of it. We make sure they have what they requested.”

“I figure if I’m saying something nice about someone, I can use their name,” she said. “But if I’m not, and there are only a few, I’ll thinly veil my description.”

Some requests include Kenny Edmonds, known as Babyface, wanting oxygen tanks by the stage.

“It’s not like we’re high up like Denver, so that was weird,” she said. “He never used them, though. A cool thing is Pat Benatar, who tours with her husband Neil Giraldo, she does her own laundry. On her tour bus, she has a small washer and dryer, and they wheel them into our dressing room. She said (it) makes her feel more at home.”

Kingston said the easiest celebrity to work with is Tony Bennett.

“All he wants his water. When I asked him what kind of water, he said, ‘Whatever you got,’’ Kingston said. “He was the easiest, sweetest guy. It’s the ones that are fading, afraid they are going down that are so demanding.”

Kingston said Crosby’s manager told her in advance he would be picky about food.

“They said you have to make sure you have stick butter for rolls,” Kingston said. “When Crosby came into the green room, we were nervous. He loved the food, so he was nervous. I told him if he liked the food, he had to sign the bottom of my butter dish, and he did. He laughed. He was just darling.”

Kingston said the requests from Diana Ross’ manager were extensive.

“It has all different foods,” Kingston said. “She walked in and said, ‘I don’t know why they do this. All I want is peanut butter and jelly on white bread,’ so there is a little communication problem there.”

The skillful way Kingston handles celebrities is a key to the Center’s success.

”Ellen is part of the creative genius here at the Center,” President/CEO Jeffrey C. McDermott said. “Her ability to dream and deliver always amazes us. She is one of our longest-tenured employees and has added her Midas Touch to nearly every facet of our organization.”

Vice President of Operations Jeff Steeg has noticed as well.

“I’ve had the great pleasure of working with Ellen for the past 10 years, and the one thing I’ve always admired is the fact that she treats everyone — everyone — like they are family,” Steeg said. 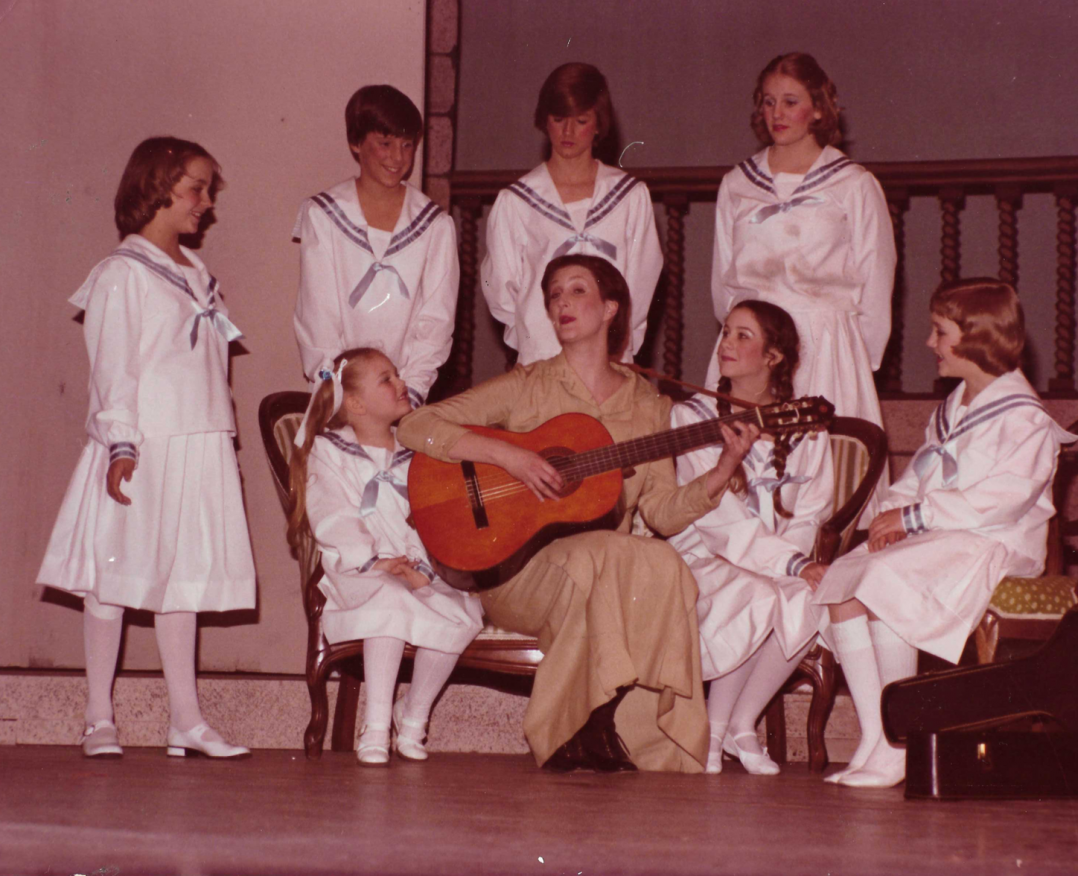 Ellen Kingston performing as Maria in “The Sound of Music” at Footlite Musicals
in 1979. (Submitted photo)

“My whole family is theatrical. My dad was a director ,and my mom was a stage manager,” Kingston said. “I grew up around (theater) but wasn’t terribly active until I was 12. Then I did some shows and sang with my brother in the coffee houses.”

The 1973 North Central High School graduate sang with her brother in an act jokingly called the Henkel Brothers.

After briefly attending Indiana University and Butler University, Kingston decided to concentrate on performing and began doing shows at Footlite Musicals, Civic Theatre and Theatre on the Square.

She also has performed voiceovers for several years. In 1996, she began performing in Indianapolis Symphony Orchestra Yuletide shows.

“Then I did costumes for it for about three years because I aged out of being a girl in a chorus,” Kingston said. ‘They sent me to New York to buy gowns and jewelry, and it was great.”

She was hired by “Menopause The Musical” from 2005 to 2009, performing two years in Indianapolis and two years on various tours.

“That was eight shows a week for two years solid at the Atheneum,” she said. “Then when I went on tour, they said, ‘Do you want to go to Florida for two months in the winter?’ And I say, ‘Yeah,’ or New England in the fall? My husband didn’t survived very well without me, so I stopped doing that. So, I came home and got the job at the Palladium in 2010.”

Kingston and husband Rick own Kingston’s at Spotlight Indy, an Indianapolis performance and venue center. The couple has four children and eight grandchildren.