You are at:Home»Current in Carmel»Carmel Community»Indianapolis Opera presents shorter version of ‘Madame Butterfly’ 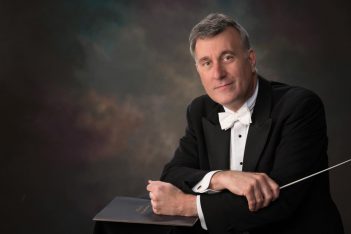 This will be like no other production of “Madame Butterfly” Alfred Savia has ever conducted.

Savia will be the principal guest conductor for Indianapolis Opera’s live-staged performance of the Giacomo Puccini classic at 4 p.m. Nov. 1 at the Basile Opera Center in Indianapolis.

“I’ve done it several times. I know it very well. It’s one of my favorite operas,” Savia said.

There will be a small audience of approximately 40 people, primarily donors, because of social distancing practices amid the coronavirus pandemic. The production will be available on a virtual link.

“It’s a former Greek Orthodox Church and it’s a very large space,” said Savia, who also is the artistic advisor for Indianapolis Opera. “We’ve loaded a set in of the house that Pinkerton buys for Pinkerton and Butterfly. It’s a tall ceiling and enough room to put the set.”

Savia said the entire production is trimmed down.

“We are probably doing somewhere between two-thirds and three-fourths of the opera,” Savia said of the 90-minute performance. “We’ve cut out certain characters and the chorus, so it can be done in an abridged fashion. There will be an intermission, but we’re doing it in two acts rather than the traditional three acts.”

Savia said the audience, which will be required to wear face masks, will be socially distanced from the singers. Cast members will be distanced, so face coverings will not be used.

“We’re not having intimate scenes between Pinkerton and Butterfly,” Savia said. “We thought maybe kiss her hand, but we are not even doing that. It’s going to be pretty obvious they are falling in love and what is about to happen, but they are keeping their space.”

Savia said a string quartet and bass will perform. Piano will cover the wind and brass parts.

“It will be six players that will be representing the orchestra,” Savia said. “It’s what we can do in the space. With the singing actors and needing space, it would be difficult to do even a reduced orchestra.”

“Madame Butterfly” was originally scheduled to be at The Tarkington at the Center for the Performing Arts in November. Due to the pandemic, there was discussion of moving it to the Palladium with the chorus being in the loft behind.

“When it became obvious we couldn’t get enough audience members to do that (with restricted capacity), we decided to go virtual,” Savia said. “Normally, we would have brought in the leads and used our resident artists for some of the supporting roles. But in this case, the resident artists are doing all of the major roles, except for Pinkerton, which is being sung by Ganson Salmon, who is a graduate of the resident artist program.”

Salmon, who grew up in Indianapolis, was performing with the Sarasota Opera when the pandemic hit in mid-March.

“We’re fortunate we have the best group of resident artists we’ve ever had. Certainly in the three or so years I’ve been working with Indianapolis Opera, it’s the very best voices we’ve had,” Savia said. “Hayley Lipke, who is our Madame Butterfly, is a star in the making. She has a sensational voice. Every one of them are every bit up to the part. I’ve been amazed when we’ve been putting this together how everyone has stepped up and risen to the challenge. I think people will be elated with how well this has come together and how we didn’t need to bring in guest artists for this slightly more intimate virtual production.”

Savia said the goal is to stage the larger production at a larger theater in the spring of 2021.

“That’s the plan, but with many plans in the time of COVID, things changed,” Savia said.

Cost for the virtual link is $15 per household. For more, visit indyopera.org.