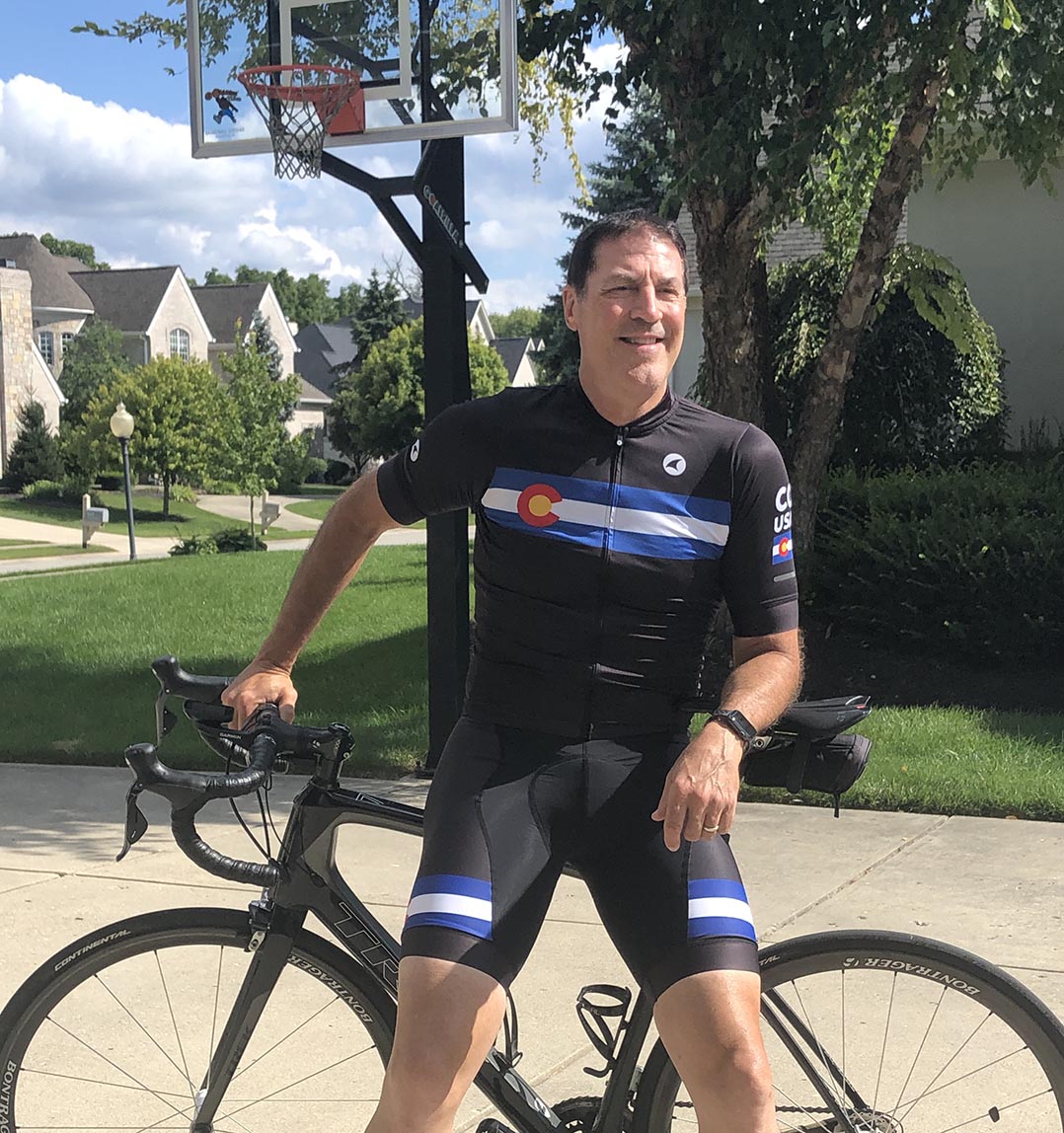 Jeff Rickard pauses with his bicycle in September, 10 months after his heart attack. (Submitted photo)

For Kristine Rickard, it was a one-word note that finally made her cry.

She went into action mode when her husband, Jeff, stumbled into their Carmel house in November 2019 after raking leaves, clutching his chest and doubled over in pain. She rushed him to the hospital and remained calm during and after his surgery, even when it soon became apparent there were serious complications. She didn’t panic when he coded twice — once for 27 minutes — as the medical team did everything it could to help him cling to life.

No, it was three days later, when Jeff, an avid cyclist, regained consciousness and learned what had happened to his 56-year-old body and what it could mean for his future. He was unable to talk, so he passed his wife a note that simply read, “Ride?”

That’s when the tears began to flow.

“It was not that he wasn’t going to be able to function, but I know how he is if there’s something he’s passionate about and he’s not able to do it,” said Kristine, an attorney and daughter of a surgeon. “That’s what’s going to impact him as a person and who he is.”

For Jeff, an ESPN and SiriusXM sports radio host and program director at Emmis Communications, the heart attack came as a complete shock. The former college football player was in top shape, ate a mostly healthy diet and had recently received a clean bill of health from his physician. But when the symptoms suddenly hit, he knew exactly what was happening. 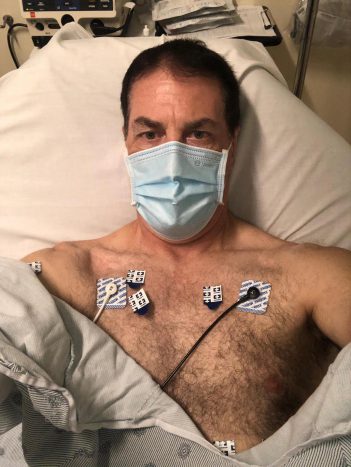 Jeff Rickard suffered a heart attack and complications in November 2019 that led to months of cardiac rehab to regain his strength. (Submitted photo)

Minutes later, he arrived in the IU Health North emergency room, where surgeons placed a stent to keep blood flowing through the affected artery. But shortly after being moved to the recovery room, it became clear something wasn’t right, and his heart stopped beating.

The medical team had to shock Jeff’s heart three times and administer CPR to bring back a heartbeat, but he soon coded again for 27 minutes. As medical staff fought to keep him alive, they realized an artery had been nicked during the initial surgery, causing blood to fill the membrane surrounding the heart and preventing it from beating. As lifesaving efforts continued, a doctor used a large needle to drain the heart sac, allowing Jeff to become stable enough to be flown by helicopter to IU Health Methodist Hospital in Indianapolis.

“That team of people that night would not let me go,” Jeff said. “I get emotional even thinking about it right now. I know they probably look at it as it’s their job and that’s what they do, but that team that night wouldn’t give up on me. I don’t know how to repay something like that. It’s amazing.”

Soon, it appeared Jeff would survive the ordeal, but it wasn’t initially clear if his brain had suffered irreversible damage after being deprived of oxygen for so long. Two days after he regained consciousness, Kristine knew Jeff’s mental faculties had returned as they watched a Colts game on television and he began criticizing the team’s defensive philosophy.

But whether he would ever ride a bike again was another story. 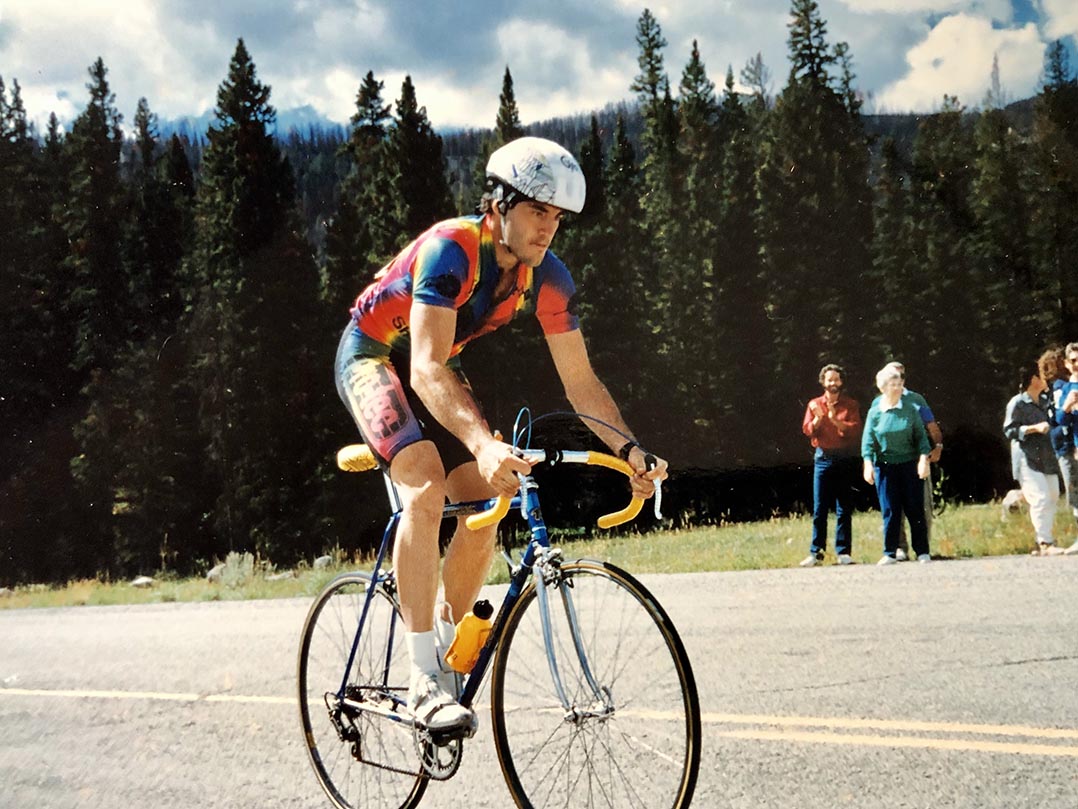 Jeff Rickard rides his bike near the Montana/Wyoming border during a race circa 1990. (Submitted photo)

‘I was completely spent’

During Jeff’s week in the intensive care unit, he began a long journey of cardiac rehab to strengthen his heart enough to get back to his normal routine.

It wasn’t easy at first.

“I’m an endurance athlete. Typically, if I feel like going for a 75-mile or 100-mile ride that day, I can wake up and decide where I want to go,” he said. “I could not walk to the end of the hall and back without feeling like I was completely spent.”

As Jeff, a father of two, made the trip to IU Health Methodist hospital three times a week for rehab, he slowly began to regain his strength. At first, he could barely walk, but eventually he was able to use a treadmill to increase his speed, endurance and intensity. He was nearly done with the rehab program when the COVID-19 pandemic struck and forced him to stay home, but he had made enough progress to begin biking again on his own.

Now, nearly a year after his heart attack, Jeff is back on the road, enjoying the fall weather by biking upward of 50 miles at a time. It’s come as no surprise to Kristine, who fondly remembers her new husband biking 10,000 feet up a volcano on their honeymoon in 2004 when most people — including herself — only bike down.

“I know how healthy and strong and how stubborn he is,” Kristine said. “He was not going to let something like this hold him back from allowing him to function in life at his fullest.”

Jeff Rickard credits IU Health’s cardiac rehab program for helping him return to cycling, but its benefits extend beyond regaining a normal routine. 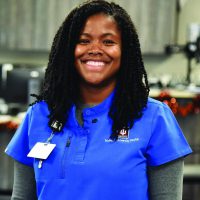 Darrika Van, IU Health Methodist Hospital cardiac rehab manager, said research shows that those who complete the program are less likely to suffer another cardiac event, and for those who do, it is less likely to be fatal.

Van said she frequently sees patients like Rickard, who are living a healthy lifestyle but may have an unknown predisposition to heart disease.

“One of the challenges is that usually fit people don’t ever think it will happen to them,” she said, adding that Rickard’s healthy habits likely delayed his heart attack and assisted in his recovery.

Rickard said it’s important for everyone to be in tune with their bodies so they know when something isn’t right, a step he credits with helping to save his life.

“If something is off or wrong, pay attention,” he said.

IU Health offers cardiac rehab at its Methodist (Indianapolis), Saxony (Fishers) and West (Avon) hospitals. The program lasts from four to 36 weeks, depending on the severity of the case. Learn more at iuhealth.org.