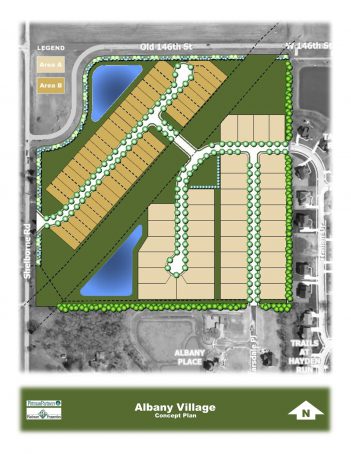 Logan Group is proposing up to 84 single- and two-family dwellings on the southeast corner of 146th Street and Shelborne Road. (Submitted photo)

Up to 84 single- and two-family homes are proposed on 37 acres on the southeast corner of 146th Street and Shelborne Road.

Indianapolis-based Logan Group is seeking to rezone the vacant land from S-1 Residential to a planned unit development, which allows for a variety of uses on the site.

Known as Albany Village, the single-family homes are planned along the eastern and southern property lines with the two-family attached villas along the western perimeter. The homes are expected to start in the mid-$400,000s, with the villas starting in the mid-$300,000s.

The site is designated on the Comprehensive Plan’s Land Use Plan map as “very low density.” Developers believe the proposed neighborhood is a good fit because of the surrounding uses and its proximity to 146th Street, which has become a major east/west traffic corridor.

The Carmel Technical Advisory Committee is set to review the proposal at its 9 a.m. virtual meeting Oct. 21.