You are at:Home»Current in Carmel»Carmel Community»Women4Change founders reflect on nonprofit’s quick growth, impact

Nearly four years ago, Jennifer Nelson Williams and Sandy Sasso wondered if anyone would show up to the event they organized — after what they viewed as a very disappointing general election — to discuss women’s issues. 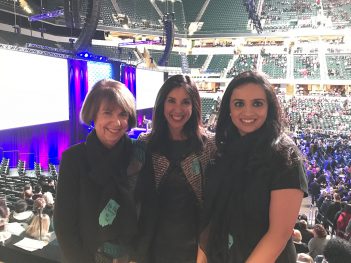 They optimistically hoped for 50 guests and were shocked when the venue reached capacity at 500 people, with hundreds more waiting outside.

“There were just cars and cars of people wanting to come to this meeting, so we realized we had tapped a very deep need,” Sasso said. “That was the beginning of Women4Change.”

Now, with another presidential election on the horizon, the group has grown to include a full-time staff, nine interns and more than 5,000 members from across the state. It’s advocated for women’s issues at the Indiana Statehouse and in Washington, D.C., developed college chapters and created educational programs, but among its most significant accomplishments is bringing the voices of more women into the political process.

“One of the things I’ve heard over the last four years is that women who joined with us are now doing activities and speaking up in ways they never have before,” Nelson Williams said. “Many of the women, when they first made phone calls to their legislators, that was the first time they had done something like that, so that in itself is huge. Bringing people forward into the political process is something we can feel very proud about.”

The nonprofit focuses its efforts on issues primarily affecting women, such as the gender pay gap, women’s health issues and sexual assault and consent. A major focus this fall is encouraging voter turnout in the November election, as Indiana typically has among the smallest percentage of voters cast ballots in the nation.

“Our mission is to educate, equip and mobilize Hoosiers to create positive change for women,” Sasso said. “What we hope to accomplish is that women, regardless of race, religion, ethnicity or sexual orientation, achieve equity in employment, in earnings, in health and in political, civic, cultural and corporate leadership.”

Women4Change is nonpartisan, although Nelson Williams said it has “progressive ideals.” Its board comprises Democrats and Republicans, and each event includes women representing viewpoints from both parties.

“Women are so good at being collaborative in their discussion, so we feel that Republican or Democrat, when more women come to the table it’s going to be a gentler process, more collaborative, with more people working together to come to a better solution,” said Nelson Williams, a Carmel resident and president of ARN Funeral and Cremation Services in Zionsville.

Sasso, a Carmel resident and rabbi who retired several years ago from Congregation Beth-El Zedeck in Indianapolis, said Women4Change’s commitment to being bipartisan is among its strengths.

“This was a way for women with different points of view to come together on issues which they could agree and to do it in a way that was respectful of others,” Sasso said. “We’re very proud of the diversity we have in our board and in our membership.”