You are at:Home»Current in Carmel»Carmel Community»Libertarian Tucker seeks to outwork congressional opponents 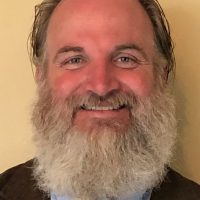 “I’m just an ordinary guy trying to do something extraordinary, and I can’t do it alone,” he said.

“That was never going to be my campaign,” he said. “I can’t outspend them, so I’m just trying to outwork them by getting in front of as many people as I can.”

The Westfield resident said he became a Libertarian because he was tired of choosing between Republicans and Democrats.

“I voted for both sides,” he said. “There’s not much change when you do it that way, so I wanted to give people an opportunity to vote for a third option.”

Tucker, who turns 41 on Oct. 22, was a fifth-grade teacher in Noblesville Schools for 11 years, leaving after the 2016-17 school year. He then stayed home to take care of his two daughters, Stella, 5, and Geri, 4, while his wife, Missy, worked.

Tucker decided to be a stay at-home father because with two children in day care, much of his teacher’s income was going toward that expense.

“The three pillars of my campaign are public education, equality and the environment,” Tucker said. “Those are three things I want to go to Washington, D.C., and be a voice for, outside of the people.”

Tucker said he wants to fix the funding formula in the state of Indiana.

“I want to end standardized testing because it’s a total waste of time and money,” he said. “I want to make sure all schools are funded. Referendums are fine, but referendums shouldn’t grow the disparity between our school districts.”

Tucker said he supports the legalization of marijuana and using the taxable income for education and transportation.

“As far as the environment, it’s preserving and protecting what we have and restoring,” he said. “Using the environment to create new markets in agriculture and industrial, I want to seek out more alternative energy sources for the state and nation, wind farms and more residential solar energy for personal homes.”

Tucker said he has been everywhere in the 5th District with his signs.

“I go to city and county parks where I set up and give speeches,” he said. “I have a weekly Zoom call that is open to anyone. Most of the time, it’s people stopping by because they see all the signs or a guy setting up with his cameras. I’m not taking money from anyone. I’m just asking for time to get to know me.”