You are at:Home»Current in Carmel»Carmel Community»CCS’ new director of community relations took career path through Hollywood 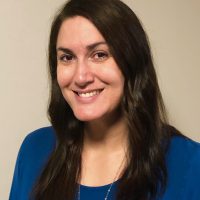 Her resume includes serving as a personal assistant for then-teen actor Hilary Duff, working as a production assistant on the award show circuit, landing a job as an associate producer at America’s Got Talent and interning at CNN in London.

She wasn’t sure if her resume, which more recently includes marketing and project management, would be a good fit for the CCS job opening, but she was thrilled when she got an interview for the position.

When Bauer realized the district was looking for a storyteller, she knew she had the credentials for the role.

“This is a job where you need someone who can shift gears quite quickly, who wants to be doing a little bit of everything,” Bauer said. “That’s all I’ve ever done, think on my feet and roll with it. It’s a good fit, I think.”

A 1999 graduate of North Central High School, Bauer moved to the west coast to pursue her dream of working in production after receiving a degree in telecommunications from Indiana University in 2003. She had gotten her first taste of the industry working as a backstage liaison for Verizon Wireless Music Center — now known as Ruoff Music Center — in Noblesville.

“When I worked backstage, I was never starstruck by the celebrity. I was starstruck by the person who followed them the closest,” Bauer said. “Back in those days I wanted three cell phones, and I could tell it was the people with the walkie talkies who were running the show.”

After several years working in production, Bauer felt ready to take her career in a different direction. So she enrolled in the University of Southern California to pursue a master’s degree in journalism.

“I had this passion for journalism and the news,” she said. “I love production, and I love being out in the field, but I also felt I wanted to help tell these stories that matter.”

Bauer gained experience with several news outlets as she worked on her master’s degree, but by the time she earned it in 2009 the nation was mired in the Great Recession. Realizing Los Angeles wasn’t the best place to begin a job search, she returned to Indiana to regroup, she said.

Since moving back to the Hoosier state, Bauer has worked as a video specialist with Girls Incorporated of Greater Indianapolis, a producer at WFYI and a freelance marketing professional, among other jobs.

Bauer said she and her husband moved to Carmel because of the strong reputation of CCS, where their daughter attends elementary school. She is eager to combine her experience with her belief in the importance of education.

“I feel really fortunate to be able to start this job and this adventure,” she said. “I feel it’s a really amazing culmination of my experience mixed with how much I am passionate about the school system from a professional and personal standpoint.”