The Fishers resident is happy to oblige. 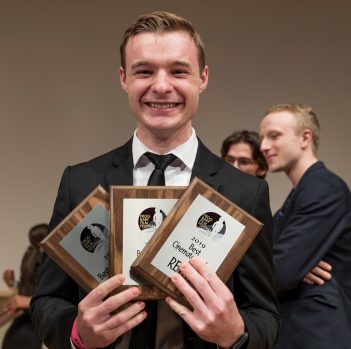 “After the crucial reception we got from our short film, we decided to make it our pilot,” he said. “We are continuing the story from the short film.”

“Cold Creek” was written by Query and his friend Jacob Stieneker, who stars in the short film. Query and Stieneker are graduates of Pike Central High School in Petersburg.

Query, who graduated from Ball State University in December 2019, majored in telecommunications and minored in entrepreneurship and digital media storytelling.

Query works as a digital media specialist at Alegion in Carmel, and owns Query Productions, which films weddings, events and films.

When creating a short film called “ReTnE” while at Ball State, Query put out a casting call on Facebook.

“Jacob responded and said he was interested in acting in it,” Query said. “This was his first involvement in being in any kind of film production. We submitted it to Ball State’s Frog Baby Festival, and we ended up winning three awards at the festival. That whole experience inspired Jacob.”

A couple of months later, Stieneker told Query he had an idea for a Western and would he be interested in making it. 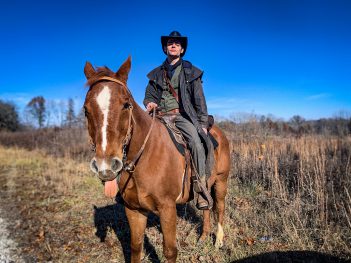 “I realized I wanted to encourage his newfound passion,” Query said. “We ended up making ‘Cold Creek,’ and that was kind of my swan song for being at Ball State.”

The film, directed by Query, revolves around William McCarthy, played by Stieneker, who returns years later to seek revenge on the sheriff for the murder of his parents.

“Cold Creek” received thousands of views on Facebook and was chosen for several film festivals. Due to the coronavirus pandemic, several festivals have been postponed or canceled.

Query said they are still working on a script for a full-length version.

“While we are writing the script, we are fundraising for the product itself,” he said. “Our goal is to actually start filming this fall.”

As of Sept. 1, nearly half of the $10,000 goal has been raised. The money raised will be specifically used for talent, props and location rentals.

“We want to invest in local talent,” Query said. “We want to rent local venues to film. With my production company, I have all the gear I need to do this.”

Since the pandemic started, more actors and actresses are looking for opportunities.

Query’s goal is to succeed as a filmmaker while staying in Indiana.

“Indiana has tried to pass a film incentive bill on several occasions. Unfortunately, it hasn’t passed yet,” he said. “I’m not entirely had it been passed (that) it was the right time for Indiana. If you look at the other states that are getting popular with filmmaking, Georgia, for instance, since 2012, their filmmaking has grown exponentially, creating thousands and thousands of jobs. Before the big boom, Georgia started investing in filmmaker infrastructure. They started investing in production studios and sound stages. They started to build the solid base and then came the film incentive bill. It was a good, well-thought-out process.”

Query said the next film bill should play to Indiana’s strengths.

“When we build our infrastructure, the Indiana film incentives bill becomes more viable,” he said.

Query said other film hubs are needed in addition to Atlanta, New York, Chicago and Seattle.

“Against the odds, we are going to try to make films,” he said. “We’re going to keep growing. In the future, I’m hoping to establish a studio in central Indiana, not just for my films, but I’m going to let other film companies come in and use it and start building this filmmaker community.”

For more, visit gofundme.com/f/query-productions-first-feature-film. A $9 donation will earn a digital ticket to “Cold Cross.”