In response to the COVID-19 pandemic, hc1, a Zionsville-based software firm, created a dashboard that company officials say can track COVID-19 data at the county and subcounty level.

The dashboard tracks what hc1 officials call “real-time data” by collecting data directly from testing sites that the company had integrated with prior to the start of the pandemic.

Brad Bostic, 45, the chairman and CEO of hc1, said the company was founded in 2011 with the intent to improve lives by providing faster ways to diagnose patients and treat them more efficiently. He said the company does so by analyzing mass volumes of health care data and emphasizing direct laboratory results. The company then interprets the data, creating personalized health care insights.

“We are able to ensure that the right patient is getting the right test so that they are diagnosed effectively and also (getting) the optimal prescription all the way down to making sure they are on the right medication for their genetic mutations,” Bostic said.

The company uses approximately 22,000 testing locations in the United States. It analyzes almost 500 million test results a month from 160 million unique individuals, roughly half of the U.S. population, Bostic said.

Bostic said the pandemic put hc1 in a unique position to identify risks within specific communities based on lab results.

“When you think about the biggest measurement that’s most impactful in the pandemic, it’s how many people are testing positive in a given area,” Bostic said. “Is that positivity higher or lower than it was yesterday or last week? So, are we accelerating or decelerating with the spread of the virus in a given community? And then, now, what level of antibody presence exists in any of these communities across the country?”

A few weeks after the World Health Organization declared the pandemic, hc1 mobilized the CV19 Lab Testing Dashboard Coalition and launched cv19dashboard.org to measure the prevalence of the virus. The data is not based on aggregated data as seen in many other COVID-19 dashboards, which Bostic said is prone to delays and errors. Instead, the data is fed directly from testing sites, often arriving within 72 hours of test completion. The dashboard only reports PCR tests, which, until recently, were the only tests approved by the Centers for Disease Control and Prevention.

“This is literally completely accurate information that is coming directly from the lab-testing instruments, so we have the purest, most high-fidelity, accurate source at the fastest possible speed to inform what’s happening with the virus at a hyper-local level,” Bostic said.

Although it doesn’t have the volume of testing results that health departments collect and share (the Boone County Health Dept. regularly reports findings of more 600 tests a week; hc1 reported results from 158 county residents last week), Bostic said the findings the company shares on its dashboard remain valuable.

The company plans to include flu data on the dashboard in the fall.

Boone County Health Dept. Public Health Educator Claire Haughton said hc1’s data, while limited, provided insights that aren’t available through the state’s online dashboard because its data is several days, if not weeks, in arrears or prone to reporting incomplete data compared to county health departments. For example, as of press time, the state’s online dashboard reports 46 COVID-19 deaths in Boone County. The BCHD reports 51 deaths, with the most recent reported on July 31, according to Haughton, who said it is unclear whether the discrepancy is caused by incomplete or delayed data reporting.

The company also offers Workforce Advisor, an automated service that measures a micro-community’s risk, such as a business, university or hospitality company. Those using the service can track the relative risk of its community by monitoring their contacts and whether individuals need to be tested. It also can send prompts to their smartphone if they need to be tested.

Ultimately, Bostic said the goals of hc1 is to save lives by providing data to those who need it faster than they currently can get it.

“Just like with 9/11, we added huge levels of security that have kept people safe,” Bostic said. “Now, moving forward, we have to add that level of health security within these major populations to keep people safe, or we’re kidding ourselves because we’re going to end up with this happening again, and we’ll be similarly disadvantaged.”

The company offers the dashboard to the public, but registrations is required for access. To register, visit cv19dashboard.org. 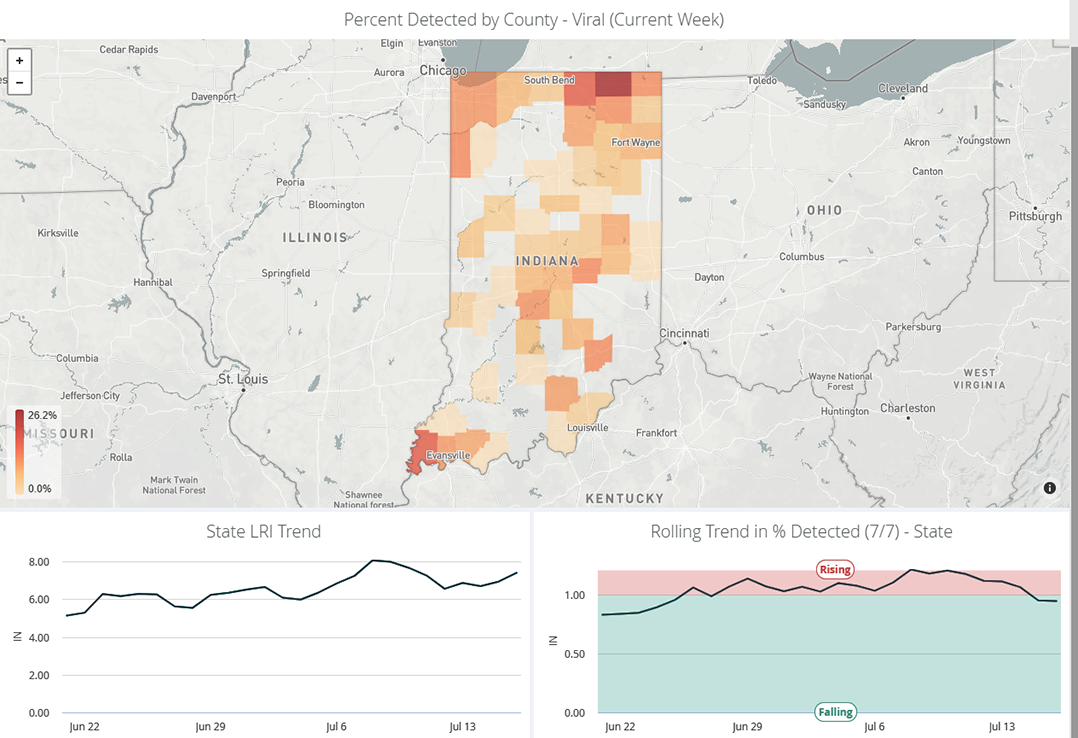 Shortly after the start of the pandemic, hc1 launched a dashboard to track the spread of COVID-19.

In April and May, Eli Lilly and Co. offered a drive-thru testing facility to front-line health care workers and symptomatic Hoosiers in high-risk groups such as those with preexisting health conditions and the elderly. To track findings and key insights, hc1, a Zionsville-based software company, in a partnership with Eli Lilly, created the Lilly COVID-19 Drive-Through Testing Dashboard.

More than 14,000 results were analyzed, configuring data breakdowns by age, gender, occupation and more. It also tracked the symptoms people reported before being tested. Brad Bostic, chairman and CEO of hc1, called the dashboard “the first of its kind” because of its ability to track previously unanalyzed data points.

For example, it found nurses and other health care workers were more than twice as likely as physicians to be infected with COVID-19 at the time. Bostic said the findings could allude to a need for more personal protective equipment for specific health care staff.

The dashboard is available online to the public at lilly.cv19dashboard.org.