You are at:Home»Current in Carmel»Carmel Community»Center for the Performing Arts delays concert schedule to 2021, shifts focus to other programming 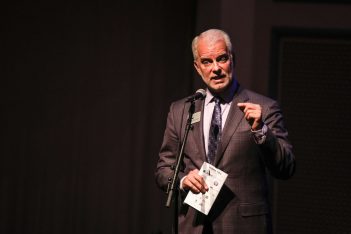 Center for the Performing Arts President/CEO Jeffrey McDermott addresses a crowd at the Palladium. (Submitted photo)

A slowdown in the national concert industry amidst the coronavirus pandemic has forced Carmel’s Center for the Performing Arts to delay its 2020-21 Center Presents concert season until the start of 2021. An initial schedule and on-sale dates for the modified season will be announced in January. Several concerts that had been rescheduled for the fall will be moved to future dates.

The Center for the Performing Arts President/CEO Jeffrey McDermott said a decision hasn’t been made on when the season will start, but he will likely know more later this fall.

“We had hoped to start in December with some holiday performances and had several booked. Unfortunately, one by one, each of the bookings ended up postponing on us due to COVID,” McDermott said. “The challenges we have as a presenting organization is the inventory of performances is national and international artists. If they don’t tour, we don’t have shows to present. There are so many variables in so many different states and communities that it doesn’t make sense for the touring arts to go out because they is no continuity of what they are able to do from one venue to another.”

Another factor is the capacity limits put in place to stem the COVID-19 spread. The limits reduce ticket revenue and disrupt the economics of every performance contract.

Under Indiana’s present state orders, attendance at the 1,600-seat Palladium is limited to approximately 30 percent of normal capacity. The same 30 percent limit applies to The Tarkington (500 seats) and Studio Theater (200 seats). McDermott said ticket revenue accounts for about one-third of the its annual revenue.

“The goal will be to have a portion of this current season occur after the new year,” McDermott said. “We are still actively booking in celebration of our 10th anniversary, which would begin with our next fiscal year of July 1, 2021.”

McDermott said the nonprofit Center for the Performing Arts hosts over events besides concerts at the venues.

“We have educational programming, we have rental events, and our resident companies are going on. Of course, they don’t rely on national touring parts,” McDermott said. “We’re a mission-driven nonprofit organization, so we would do things different than a for-profit organization in that we will present artists and programs that aren’t necessarily going to make money for us but are consistent with the mission.”

The Center’s production team has invested in new broadcast-quality video equipment to accommodate livestreaming of events, including a revamped “Classics in Context” classical music discussion series and the new “JazzTalk” series. The first “Classic in Context” is set for Sept. 15. The first “JazzTalk” is set for Oct. 13.

Another series premiering this fall will be a new livestreaming performance series, “Live at the Center,” featuring top area and regional artists in a range of styles.

“It gives us an opportunity to highlight them, and there could be some hybrid-type performances where we have a combination of live audiences socially distanced and livestreaming,” McDermott said. “The innovative part of the strategic plan we had is the desire to do livestreaming events. What the COVID-19 pandemic has done has pushed us ahead in that planning and looking do something we planned to do all along, but the urgency of it makes it that much more important to do it now.”

More than 40 live events are scheduled through December, including performances by the resident companies, Carmel Symphony Orchestra, Civic Theatre, Gregory Hancock Dance Theatre and the Indiana Wind Symphony. Actors Theatre of Indiana, another resident company, has decided to cancel its 2020-21 season, which had been slated to start Sept. 4.

“We look at options where some of our resident companies can perform in the larger venues, so even with social distancing, it gets them closer to what their maximum capacity might be,” McDermott said.

The education and enrichment programs include the monthly Faegre Drinker Peanut Butter & Jam performance series for families with young children; the Front Seat program, which brings high school and college students into exclusive Q&A sessions with arts and entertainment professionals; and the Palladium Bookies book discussion club and Luminaries, a weekday speaker series with performing arts presenters. These programs are continuing, either in person, online or in some combination of the two.