You are at:Home»Current in Carmel»Carmel Community»Carmel author donates chemistry book for kids to Head Start

From the sun to plants to children’s toys, science can be found everywhere in daily life. 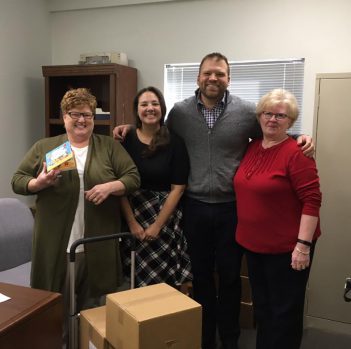 Carmel resident Stephanie Ryan noticed the parallels between chemistry and her young son’s sorting games, so she wrote a children’s book that taught science through comparisons with everyday objects. What started as a PowerPoint to teach her son the basics of science became a book called, “Let’s Learn About Chemistry.”

Several community members supported the project through a Kickstarter campaign. Ryan raised more money than her initial goal, so she invested back into the community with a donation of books worth $8,200 to the Indiana Head Start Association, a school-readiness program that serves low-income families with children up to age 5. Ryan met with IHSA officials to donate 590 copies of her book, enough for every IHSA program in the state to receive at least one book.

Ryan hopes that “Let’s Learn About Chemistry” will foster curiosity in STEM fields from a young age.

“I think (supporting IHSA) is important because it’s equity in science,” she said. “I think that science is for everybody. It’s not just for people who can afford it. It’s really important to show kids from all over that they’re able to become a scientist, that science is around them and it’s not just an elite field that only certain people have access to.

“I think that by giving to the Head Start programs, that opens the doors for a lot of people into science.”

Ryan’s goal was to make science relatable to young children by drawing inspiration from her son’s daily life, so she featured her 3-year-old son and his three best friends as the book’s main characters.

“He was playing one day and it just clicked in my head while he was sorting his toys by color or by shape,” Ryan said. “I thought to myself, ‘I think a lot of science is sorting, and I don’t know why we don’t teach it that way.”

“Let’s Learn About Chemistry” was released on Amazon and other platforms on June 2.