You are at:Home»Current in Zionsville»Zionsville Cover Stories»A slice of gratitude: Zionsville women launch Pay it Forward with Cake

Two Zionsville women, with help from a Facebook group, have created a program allowing residents to thank community members during the COVID-19 pandemic.

Nicole Adams, dubbed the “community volunteer coordinator of Zionsville,” and Karin Glass, owner of Serenity on Main Street, have started the Pay it Forward with Cake program and have sold dozens of cakes to residents looking to thank people in their lives and community leaders.

“It’s for a lot of people who maybe are doing things like making masks or doing something for first responders or other people,” Glass said. “The first responders, sure, they’re doing the heavy lifting, but there are a lot of people who are doing small things that need to be thanked because the small things put together are a big thing – teachers that are going and reading to kids at the end of the driveway. There’s a couple over off of Willow that have made, like, 4,000 facemasks.”

The program started when Glass awarded Adams several cakes for taking pictures for one of Glass’s upcoming websites, dinnerdivine.com. Rather than consume the cakes herself, Adams contacted the Facebook group Z’ville Moms, and several of its members expressed interest in sending a cake to someone who had made an impact on their lives or in the community.

“Within two minutes, the cakes were gone,” Adams said.

The demand soon reached a point where the two women couldn’t make all the deliveries. On May 3, they had to coordinate the delivery of five cakes. After the start of Pay it Forward with Cake, they shifted to asking recipients or givers to pick up the cakes at Serenity if the recipient lives outside of Zionsville. 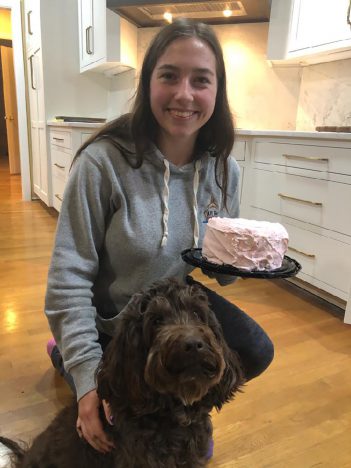 One of the cake recipients, Sophia Pruitt, a 17-year-old Brebeuf student, raised $14,000 for the Humane Society of Boone County’s Mutt Strutt fundraising competition, but the April 25 event to celebrate her and her team’s efforts was cancelled because of the pandemic. To thank her in another way, someone gifted her a strawberry cake.

“I think it definitely lifted everyone here’s spirits,” said Pruitt, who lives in Traders Point. “It was just something that we got to leave the house, and we brought our dog with us. We got to bring something special home that our family could have, so it was a bright spot in our week.”

Another cake was gifted by a woman to her 83-year-old mother, who has leukemia and has been quarantined throughout the pandemic. And a local family whose father was in a motorcycle accident was gifted a cake.

Many other cakes have been gifted since the program began.

Adams said residents, especially members of the Facebook group, began donating to the program. Now, people are not only donating, they are ordering cakes to send directly. The cakes have gone to a variety of people, ranging in age and occupation. 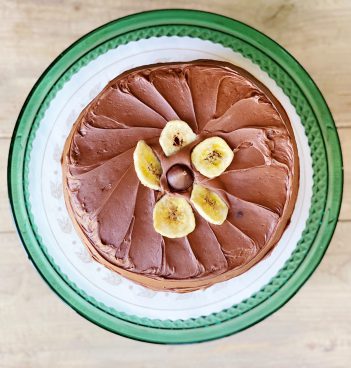 A cake to be delivered in the Pay it Forward with Cake program. (Submitted photo)

“We’ve gifted to people who literally, since their job has been put on hold, they have been full time making masks for the state of Indiana,” Adams said. “It’s (done) just randomness and to spread joy and bring a little cheer to some sad situations and to say, ‘We see you’ to the people that are going above and beyond. It’s a way to celebrate people in the good times and the bad.”

Adams said a local nurse called to ask about donating money to the cause. Adams said it was a significant inquiry because nurses should be the ones receiving cakes for their sacrifices during the pandemic.

Adams and Glass said they hope the idea of gifting cakes as a way of showing thanks catches on across the U.S.

“We’re encouraging bakery’s across the country to do the same thing,” Glass said.

“That’s the real goal,” Adams said. “We’re hoping to get it to go nationally, to encourage other people in the communities where they live to partner, hopefully, with a bakery or a chef of some sort.”

But the women insist one of the primary participating conditions is that the cakes be sold for no more than $10. They said if the cakes are too expensive, it defeats the purpose of making them available and affordable for anyone who wants to thank someone.

To donate to Pay it Forward with Cake, call Serenity at 317-873-5590 or visit payitforwardwithcake.com.