Intelligent Systems supplies the perfect technology for times of pandemic.

“It’s a thermal-based camera system combined with a black body device that gives a way to calibrate the image sensors against the background,” said Stephe Blansette, Intelligent Systems founder and president. “There is a lot of technology coming out right now that isn’t a two-pieced thermal scanner, so it’s not nearly as accurate as this product is (measuring body temperature). The product is .3 degree celsius accurate. It’s able to analyze up to 5,000 people per hour coming through the image screen.” 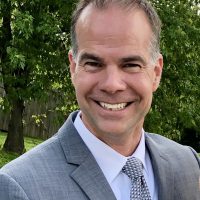 Blansette said the system understands the geometry of the face and focuses in on the forehead, the largest flat surface on the face. It works whether the person is wearing a mask or not.

The engineering and integration company, which started in 2004, is near the Westfield-Carmel border at the intersection of 146th Street and Carey Road.

Blansette said the system sounds an alarm or sends an email when it detects a high temperature.

“You want to pretty quickly pull that person aside because of the high risk and do a secondary screening,” Blansette said.

Blansette, who said he also would work with city and county governments if there is interest in the system, said the technology is fairly new in the United States.

“I believe we’re the first to deploy it here in Indiana,” he said. “We’ve had good success with it so far.”

Blansette said he didn’t want to go into detail about his company’s clients, but IU Health has already publicized it is using the company’s system. Manufacturing companies are other potential clients.

Businesses can use the system to determine who should be at work, according to the company policy on temperatures. Blansette said the best way to use it is to have someone monitor the screens so they can act quickly on any high risk.

Blansette said large venues holding events are potential clients for the technology to be used at entry points.

“You can’t just manually scan people one at a time,” he said. “This technology allows you to move a high number of people with a high degree of accuracy through the entry.”

The average system price starts at approximately $23,000, depending on the features.

“It also does facial recognition,” Blansette said. “If you have an employe who has made a threat, we can put that image into a database, and the camera will recognize them any time they walk into a building as long as there is a camera in that area.”