You are at:Home»Current in Carmel»Carmel Cover Stories»Wrestling Theology: Congregant pins down faith with monthly matches at Carmel church

The road to Wrestling Theology began with a Sunday morning drive.

But first one has to understand its founder Rich Abbott appeared headed nowhere in late 2011. Abbott had just lost his job and then discovered his live-in girlfriend was dating his only friend in the Indianapolis area behind his back.

“Then I was left without a job, my girlfriend or any friends,” said Abbott, who was then living on the northeast side of Indianapolis and now lives in Fishers. “The funny part is, she wouldn’t get out of my apartment because she was on the lease. One Sunday morning, I woke up and she was in my bed and I didn’t know why. I didn’t want to be there, so I got up and drove around.

“I went into a church because I thought what else is there to do on Sunday morning? I thought I could probably use some friends that aren’t going to do that to me.”

Something clicked, and Abbott decided to give Christianity another try. That eventually led to Wrestling Theology, a ministry featuring pro wrestling shows at Mercy Road Church. The next show, Rise Up, is set for 6 to 9 p.m. Feb. 22 at the church, 2381 Pointe Pkwy. The show is Wrestling Theology’s 26th.

“We have a message at every show of faith, hope and love,” said Abbott, who grew up in Hanover.

Abbott’s parents turned away from their Christian church when he was 8, and his older brother, who had cerebral palsy and other health issues, died at age 10.

“We stopped going to church. I later found out the reason was because some of the people in the church said to my parents, had they believed harder, he would have been healed,” Abbott said. “That put me on a path of being very anti-Christian for a long time in my life.”

Abbott said the Wrestling Theology idea came about when was in a discipleship huddle with Earlewine, who is known as the Pub Pastor and leader and founder of Pub Theology. Earlewine also is host of Radio Theology on WZPL.

“I came to Christ through Pub Theology,” Abbott said.

Abbott, 35, told Earlewine and the group how he had been to a pro wrestling convention and met all of the wrestlers.

“One of the guys in the huddle said, ‘I think you should talk about your passion for wrestling and newfound belief in Christ and combine those two,’” Abbott said. “It sounded like something to explore. I reached out to wrestling fans (to see if) they wanted to watch the next WWE pay-per-view together. We started doing these viewing parties and building a community with wrestling fans.”

Abbott went from viewing parties to bringing in retired wrestlers to speak to presenting a wrestling show at the church. At first, Abbott had just gotten approval from Mercy Road to have another group host a wrestling show.

“Right before, the company decided they weren’t ready to do it,” Abbott said.

So, Abbott decided to organize it himself.

“I think we still could have done better,” he said. “I decided to try again with a little more time to promote it because this was last-minute.”

The first show under the Wrestling Theology format was in April 2017. Abbott brought in WWE Hall of Famer Bushwhacker Luke, among others. Another show was held in November 2017. From there, Abbott decided there was enough interest to hold one every month, primarily featuring up-and-coming wrestlers. 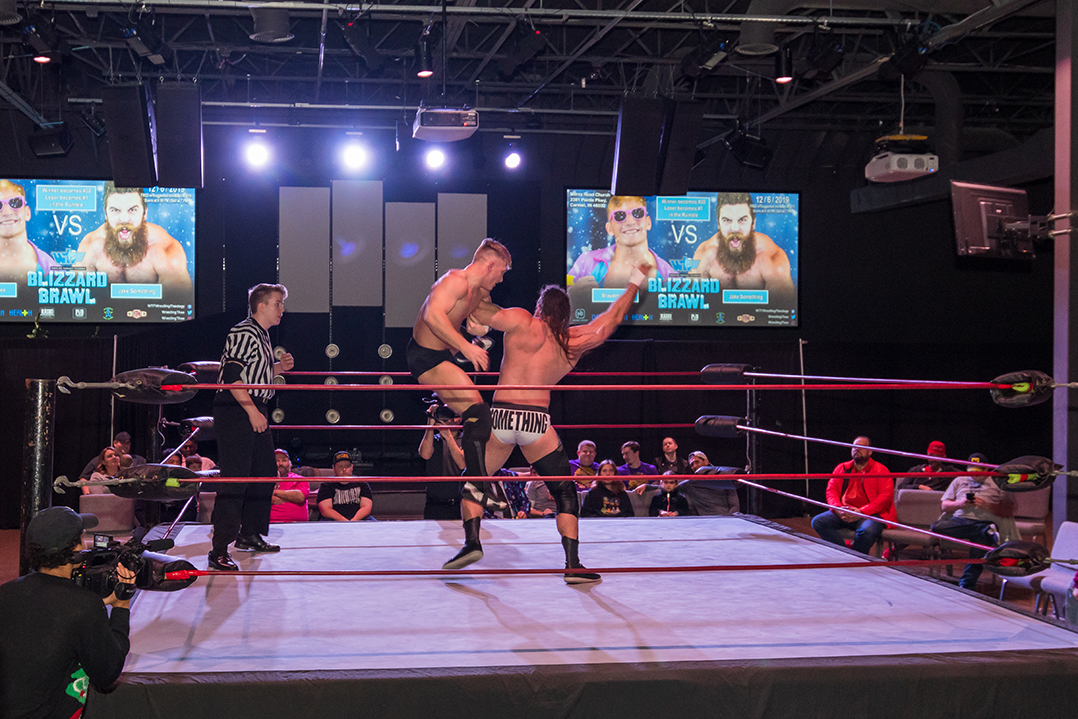 Jake Something, right, picks up fellow wrestler Brayden Lee for a bodyslam during a match of the Winter Brawl at Mercy Road Church in Carmel. (Photo by Ben Stout)

The Wrestling Theology format consists of three or four matches, followed by a 5- to 10-minute talk before intermission, and then three or four more matches.

“It is about how we can relate wrestling to a message of faith.” Rich Abbott said. “We’re not here to preach what you hear on Sunday morning. We’re there to give people a taste of it. If they want to know more, we let them know church times and invite them out to other events.”

Abbott said he doesn’t try to intertwine the message with the matches.

“I’ve seen that before, and it comes off cheesy,” he said. “People who aren’t Christians can come out and enjoy the show and, hopefully, they’ll stick around and hear the message.”

“It’s given us a great opportunity to give back to the community but reach our goal of telling people about our faith in Jesus,” Husmann said.

“We have a policy of regardless of whether I think it’s a bad idea or not, if it’s going to benefit our mission, we do it,” Husmann said. “I’m really glad we did, because it reached a lot of people we never would have reached. We’ve had some agnostics or atheists who have given their lives to Christ because of the ministry. For us, that’s a huge win.”