Former resident Brad Klopfenstein returned to the City of Lawrence six months ago, but he’s making strides for community involvement.

Klopfenstein started his position as president for the Greater Lawrence Chamber of Commerce Feb. 10. He and his girlfriend, Sheila Cego, moved into one of the former officers’ quarters in Fort Benjamin Harrison in September 2019.

“I lived in Lawrence briefly 25 years ago. I’ve always lived on the east side (of Indianapolis) somewhere, but we just got here and fell in love with what’s going on in Lawrence,” Klopfenstein said. “I started attending public meetings, like the redevelopment commission, and by chance happened across the mayor (Steve Collier), met him and fell in love with the community.

“I saw this position was open and thought it would be a perfect for me.”

Klopfenstein previously led a private social organization, the Antelope Club, in downtown Indianapolis. Prior to that, he was executive director of the Indiana Licensed Beverage Association, a trade organization for bar and restaurant owners.

Klopfenstein already has plans for the chamber’s growth.

“My goal would be to make sure the chamber is somewhat ever-present with the businesses in Lawrence and to be a conduit so businesses know what other businesses are here and have them work together,” Klopfenstein said. “I think enhancing the community and getting our business partners involved in community events would be key.

“I want to make sure people know what’s going on, what the opportunities are, what the needs are in the community.”

Klopfenstein also wants to increase local businesses’ sense of being part of Lawrence.

“There’s a lot of businesses here in Lawrence who don’t truly have a sense of community as far as they think of themselves as Indianapolis and not Lawrence,” he said. “I want to make sure everyone sees Lawrence as its own distinct entity and has a lot to offer. Lawrence Township is a big area. You have everything from Geist down to 42nd and Shadeland and everything in between.

“We have a big geographic area, and we need to make sure we are touching everybody in that area.”

In order to connect, Klopfenstein plans to use a combination of publications, emails, group events and other communication avenues.

“Events I think are a key component of that, and we need to mix it up geographically and time and day,” he said. “Some attendees respond to breakfast, some luncheons and others after-hours.”

The chamber has already mapped events for  2020.

“I want there to be a lot of business-to-business networking,” Klopfenstein said. “I think I certainly need to get with the mayor and the council here in Lawrence and make sure we are working hand-in-hand with them and get a better understanding of what their initiatives are and make sure we work together on those.”

Klopfenstein wants the chamber to be an incubator for business startups by young professionals and entrepreneus.

“I want to make sure they know what resources are available,” he said “We should be working with the Indiana Economic Development Commission and the Small Business Administration just to make sure we have a handle of what those resources are so we can then present those to our members and give them a reason to join.”

Greater Lawrence Chamber Board of Directors chair Cassandra Faurote said Klopfenstein will be an asset to the organization.

“We are just really excited to have someone of his caliber to lead us into the future,” she said. 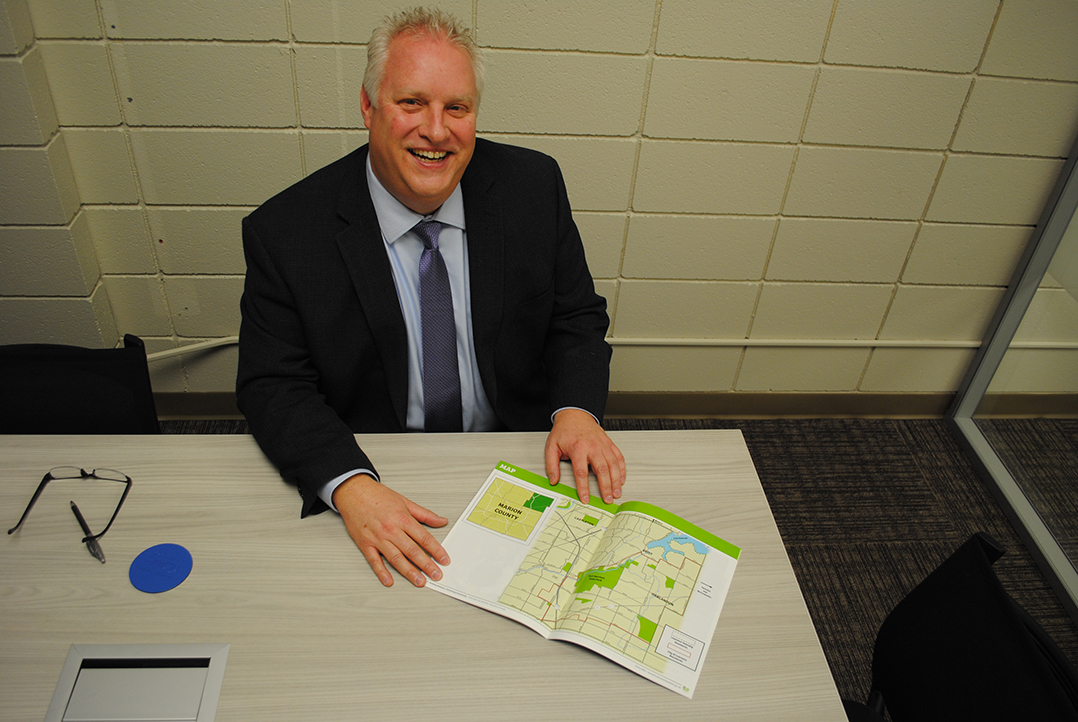 One of Brad Klopfenstein’s missions as chamber president is to serve all of Lawrence Township, including Castleton and Geist.

The Greater Lawrence Chamber of Commerce recently moved from its building near Fort Benjamin Harrison to a suite in the Metropolitan School District of Lawrence Township administration building, 6501 Sunnyside Rd.

“The building (on Otis Avenue) was for sale, so we had to look for a new space,” said Cassandra Faurote, Greater Lawrence Chamber of Commerce Board of Directors chair. “There are other not-for-profits in this building. We have a really good relationship with both the schools and mayor’s office, and it’s a real good trio partnership going on. (The schools) were kind enough to find space for us.”