You are at:Home»Current in Carmel»Carmel Community»Drozda book gives IU sports some love

Joe Drozda has written a book that offers something for every Indiana University fan.

The “I Love IU” side of the reversible book has chapters that cover the great victories over Purdue, and another features the outstanding players, many All-Americans, that figured prominently in the victories. 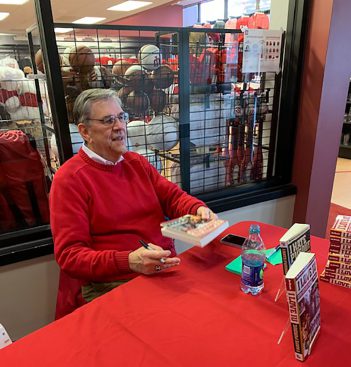 “It goes through the players and coaches we loved, the traditions we loved and the campus we loved,” said Drozda, who is a member of the Hoosier Hundred within the IU Varsity Club.

Drozda, a Carmel resident, graduated from IU in 1970.

Flip the book over and there is a “I Hate Purdue” side featuring stories on heartbreaking losses to Purdue in football and basketball. There also are chapters giving the Boilermakers their due in the number of great coaches and athletes the school has produced.

“I’m a Christian, so I don’t believe in the word hate, but I didn’t have a choice on that,” Drozda said of a publishing title decision. “I don’t put any hate out about Purdue. I put the guys who beat us. (Football coach) Jack Mollenkopf beat us like a drum and (Purdue basketball coach Gene) Keady had a winning record against (Bob) Knight. There were a couple things on the campus I ripped them on and on their traditions, like the IU sucks chants.”

Drozda did include a poll that showed West Lafayette dead last in a ranking of best Big Ten college towns in a vote by Big Ten Network and ESPN analysts.

The book was published by Cardinal Publishers Group in November. The book is available at Barnes & Noble, Books-A-Million and Amazon. Drozda will sign copies of the book at 7 p.m. Dec. 21 at Barnes & Noble, 14790 Greyhound Plaza in Westfield.