A passion for music brought Wes and Cindy Colter together. Members of the Indianapolis Symphonic Choir, they met there, even though neither began their music career as a vocalist.

Now, with their 54 combined years in the choir, the Noblesville couple will perform in the Dec. 19 production of Handel’s “Messiah” at the Palladium in Carmel. They have performed in the show many times through the years. 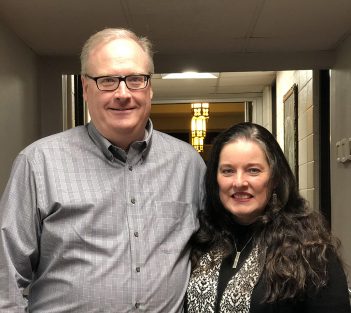 Cindy, 58, majored in music but wasn’t a voice major at Furman University in Greenville, S.C. But she was a member of the Furman Singers. Wes, 54, was a business major at Indiana University but also studied organ and began playing in churches and with choirs.

“I didn’t sing after college until I moved to Indianapolis in 1989,” Cindy said. “Not knowing anyone here, I was looking for things to do with my time because I did not have a job immediately, and I saw an ad in the newspaper for auditions for (Indianapolis) Symphonic Choir.

“In 1995, I was already married, and we moved to a much bigger house,” Cindy said. “Wes’ family had a furniture store, so in addition to knowing him in the choir, I got to know him that year as friends. Later, I was divorced, and Wes was still a friend. We were married 2003. We had members of the choir sing at our wedding. It was very special for us.”

Cindy said her favorite vocal in “Messiah” is “For Unto Us A Child Is Born.”

“It’s my favorite little choral thing,” she said. “I think it’s just so welcoming of the holiday season, and for those of us who are Christian churchgoers, the church year.”

“(‘Messiah’ is) a challenging piece to sing,” Wes said. “A lot of church choirs sing parts of it, but to sing the entire piece for three hours is a vocal challenge, and I think we all enjoy that a lot. It was written as a performance piece, not as a church piece. All of these oratoriums were actually staged opera productions, basically, so they were intended as entertainment rather than church pieces. It’s a real audience favorite year in and year out, but for those of us who are singing, I think that music is beautiful and timeless. The entire story of how the music came together in the very beginning when Handel wrote the piece is just an amazing story.

“He wrote the piece in three weeks, so he wrote three hours of music with solos and orchestra and choruses all in a very short period of time. It truly was inspired. It covers the entire life of Christ.”

Typically, the Colters sing together in the choir’s “Festival of Carols” production. Although they aren’t this year because of scheduling conflicts, the show will return for three performances — 8 p.m. Dec. 20 and 3 p.m. Dec. 21 and 22, also at the Palladium. Tickets range from $15 to $57.

“Messiah” will start at 7:30 p.m. Dec. 19. Indianapolis Symphony Orchestra Associate Conductor Jacob Joyce will direct the show, and tickets range from $15 to $91. For tickets, visit thecenterpresents.org.