You are at:Home»Current in Zionsville»Zionsville Community»ZCHS’ Hartwig invited to All-American Bowl

As an offensive lineman, Zionsville Community High School senior Gus Hartwig isn’t used to being in the spotlight. 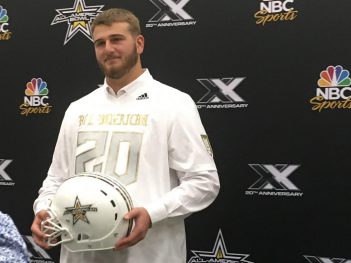 So, Hartwig admitted he was a bit uncomfortable at an Oct. 30 school ceremony celebrating his invitation to the U.S. Army All-American Bowl. Hartwig, who was presented his jersey, will play in the prestigious high school football game Jan. 4, 2020. The game is televised by NBC.

“I just want to do my job,” Hartwig said.

How well he does it drew national attention to the Purdue recruit.

“I didn’t think I was going to get it, then when I finally got the news, I was overcome with emotion, I was really excited,” Hartwig said. “It’s a special opportunity to represent Zionsville on a national stage and, hopefully, represent it well.”

Scott Turnquist, in his first season as the Eagles coach, has become a big fan.

The 6-foot-5, 300-pounder said he has gotten stronger each year and improved his technique. Hartwig said he succeeded by concentrating on doing the little things.

Hartwig has started all five offensive line positions during his high school career. However, he will likely play center at the All-American Bowl and was recruited by Purdue as a center.

“You are always in the middle. You are making the calls and who you are going to, what we’re doing,” he said.  “Coach can trust me to make the calls, and I feel I can do that really well.”

Hartwig’s final two choices were Purdue and Virginia. He committed to the Boilermakers in March. Proximity to home was a factor.

“I like the academic and athletic balance at Purdue,” said Hartwig, whose father, Myles, was an offensive tackle at Ball State.