You are at:Home»Current in Westfield»Westfield Community»New water tower slated to open this month

A new water tower is under construction at 193rd Street and Six Points Road. It is slated to open later this month. 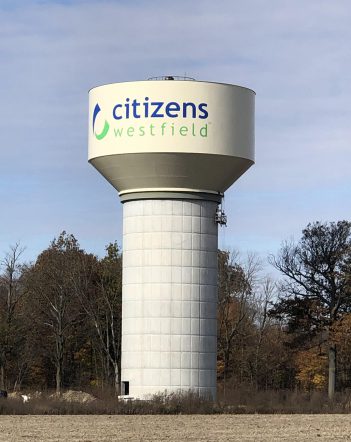 The new water tower at 193rd Street and Six Points Road is slated to open by the end of the month. (Photo by Anna Skinner)

“Obviously, Westfield is growing, and one of the things (the water tower) specifically does, and most important is, it stores water that can be used in the system, especially during peak times or in case of an emergency, so the No. 1 thing it does is provide fire protection,” said Ed Bukovac, Westfield’s senior manager of engineering and plant operations for Citizens Energy. “Having that water already made in inventory helps pull it out quicker and fight the fire.

“The other thing it does, especially in the summer, is Westfield has a high irrigation demand where people are watering their lawns and a lot of sprinkler systems kick on early morning, all at the same time. This allows there to be a supply of water already ready to go.”

The new water tower will have a 1 million gallon capacity, which is twice as big as the four other water towers Citizens has in Westfield.

“It’s called a composite tank, so the pedestal sits on concrete and the rest is welded steel. That actually makes it easier for long-term maintenance since we’re not painting as much of it,” Bukovac said.

The area for the new water tower was chosen due to growth from Grand Park and Chatham Hills.
“There’s a lot of development going on, and there are quite a few planned unit developments in that area that have been approved or are in the process of being approved,” Bukovac said. “It’s just an area that was up for growth and kind of at the northwest corner of our system.”