State Sen. Victoria Spartz is proposing a resolution to establish an efficient process for constituents to report issues or complaints with state or local government. 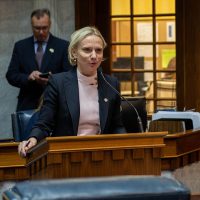 “I get a lot of different emails from my constituents, and some of those emails were people having some issues or problems with different local or state government units,” Spartz said. “I have to refer them to the appropriate body because I can’t go investigate myself, and I don’t want to just disregard (the complaint) because it’s important for us to address it.”

When a constituent requested information on the appropriate place to refer a complaint, and Spartz looked into the reporting process. She found that the Indiana Inspector Feneral only has jurisdiction over state agencies, but Spartz suggested the constituent file a complaint with the inspector general as she worked to establish a working committee to further explore the best process.

“We are working on really reassessing the whole situation and set up a working group for the audit committee to assess financial reporting in general,” she said.

Spartz suggested the State Board of Accounts work with the inspector general and other organizations, such as the Dept. of Revenue, to find the most efficient way to establish auditing procedures.

When Spartz proposed the resolution, the Inspector General Lori Torres reached out to discuss the platform with her, and the committee began examining other organizations with similar processes to learn the best way to do it.

Because the next budget legislative session isn’t until 2021, any changes that could affect state budgets would have to happen during the 2021 session.

Spartz said there are government platforms for constituents to address concerns, but she wants to consolidate them into an easier process that is more inclusive and streamlined.

“We want to assess the efficiency of this process,” she said. “I would like to do procedures differently and see how we can look at what we have and can we actually consolidate all of these hotlines into something more? We have several processes to send complaints, like the State Board of Accounts, the inspector general or specific hotlines for Medicaid fraud or some other issues. There’s a lot of different ways. I feel we can have a more streamlined way just to make it more clear or easy if someone has a reason to do that. It will allow more legal protection for any person and can address all concerns.”