You are at:Home»Current in Noblesville»Noblesville Community»Noblesville High School scholarship to honor Davis, Cole 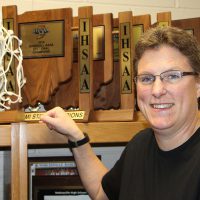 The Noblesville High School girls basketball team has established a scholarship fund to honor Cole and Davis, both Indiana Basketball Hall of Famers. NHS volleyball coach Jill Almodovar played with Davis and Cole on the school’s 1987 state championship team and remained close friends with both.

“I know both of them would feel as though this is an honor to have a scholarship in their names,” said Almodovar, whose maiden name is Lyon. “They would be proud. They both had amazing basketball careers, (were) successful businesswomen, big contributors to our community. This is a way of keeping their legacy alive. This will award young basketball players to go fulfill their dreams just like Courtney and Krissi did.”

Davis and Almodovar were former NHS volleyball teammates, and Davis had previously served as an assistant coach under Almodovar.

Almodovar plans to give an annual Krissi Davis Legacy Award to the most coachable volleyball player. 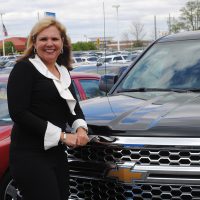 Courtney Cole was the former co-owner of Hare Chevrolet in Noblesville. (File photos)

The scholarship fund will be managed through the Noblesville Schools Education Foundation and will provide financial assistance each year for seniors on the NHS girls basketball team.

“Honoring the legacy of these two amazing women means so much to me and to our whole basketball program,” stated Donna Buckley, NHS girls basketball coach. “Krissi and Courtney were role models in basketball and in life, representing excellence on and off the floor. This scholarship will give today’s students an opportunity to follow in their footsteps by pursuing their dreams and making a difference in the lives of others.”

The team will celebrate the legacies of Davis and Cole at the Nov. 9 home game against Fort Wayne Snider. The junior varsity game starts at 5 p.m., followed by the varsity game at approximately 6:30 p.m. Proceeds from the games will go to the scholarship fund.

Custom T-shirts honoring Davis and Cole may be purchased through the Noblesville Girls Basketball Club by Nov. 11, with all proceeds going to the scholarship fund.

For information on T-shirts or donating to the fund, visit noblesvillegbc.com.