You are at:Home»Current in Carmel»Carmel Community»Indianapolis Opera brings auto racing touch to ‘Elixir of Love’

“Have you ever seen a race car at an opera before?” Starkey said.

He knows the answer is likely no.

“For the first time at Indianapolis Opera, we will connect the international world of opera and motorsports in the same show,” he said.

Starkey has made adaptations to the comic opera “Elixir of Love,” which the Indianapolis Opera will present Nov. 15 to 17 at The Tarkington at the Center for the Performing Arts in Carmel. 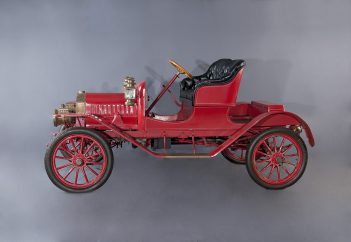 A 1909 Maxwell, on loan from the Indianapolis Motor Speedway Museum, will make a stage appearance along with IndyCar driver Zach Veach, a Zionsville resident, in the production.

“We have slightly adapted the show to a very particular time and location, which is generally not the construction of the opera that Gaetano Donizetti wrote,” Starkey said. “It’s traditionally set around the 1860s in an Italian village.”

Inspired by relationships between Indianapolis and Italy, Starkey has set it in 1910 in Lucca, Italy.

“Lucca is a famous Italian city, where for the Andretti family, opera and motorsports came together,” Starkey said. “The Andrettis moved there as refugees from World War II.”

The Andretti family later moved to the United States.

Starkey saw a documentary about the 50th anniversary of Mario Andretti’s 1969 Indianapolis 500 victory. Andretti and his twin brother, Aldo, were introduced to racing through a mechanic shop in Lucca.

“Mario’s father made some extra money by working in the opera house in walk-on roles, and the family would be able to go and see the opera,” Starkey said. “We’re not setting it in the era when the Andrettis were there, which was the ’40s.”

Dulcamara, a con man posing as a pharmacist, is selling a fake love elixir, cheap Bordeaux, to the citizens.

Starkey said the tie to Indiana is the automotive world that was developing in Europe and the U.S. In Indiana, automakers were developing, and the first Indianapolis 500 was in 1911.

“He is on the docket to do the role soon at The Met, so he is coming here to try it out,” said Starkey, a Geist resident. 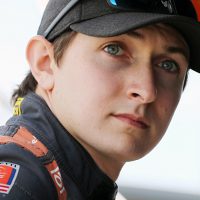 “I think Mario (Andretti) was first approached for this role and he had a schedule conflict,” Veach said. “They started looking for other drivers. They called a good friend of mine and he told them about me, and luckily I was available.”

Veach, 24, said he fortunately he doesn’t sing or have any lines.

“I’m strictly a walk-on for this,” he said. “I’m completely out of my elements for this. My girlfriend (Katie McConnell) went to school for musical theater, so she is giving me an idea about it. My life has always been about race cars, so this is going to be a new experience.”

Veach has never been to an opera but is glad to be a part of this one.

“For me, Mario has been like a grandfather,” Veach said. “I’ve been with the team since I was about 15 years old. He’s been a big part of my life as far as a figure I look up to. He is connected to this with the area he grew up. For me to be a part of that in my own sense is an honor for myself.”